Xiaomi files patent for under-display camera phone: Here is what it could look like

Xiaomi appears to have filed a patent for a commercial product that could come with an under-display camera. Here is everything you need to know about it. Xiaomi has long been known to be working on a smartphone with an under-display selfie camera. Over the last few months, the company has been locked in a battle with Oppo to launch the first smartphone to bring an under-screen camera. And now, it appears the company is one step closer to finishing first in the race.

After showing off a prototype phone with support for the technology, Xiaomi appears to have filed a patent for a commercial product that could come with an under-display camera. While the technology still remains under development, the patent gives us a first look at what could be the world's first under-screen camera phone.

Discovered by LetsGoDigital, the patent shows off the design of the phone and reveals that the device could come with flat-screen and thin edges. The device appears to share design elements with the Xiaomi Mi 9 from last year. 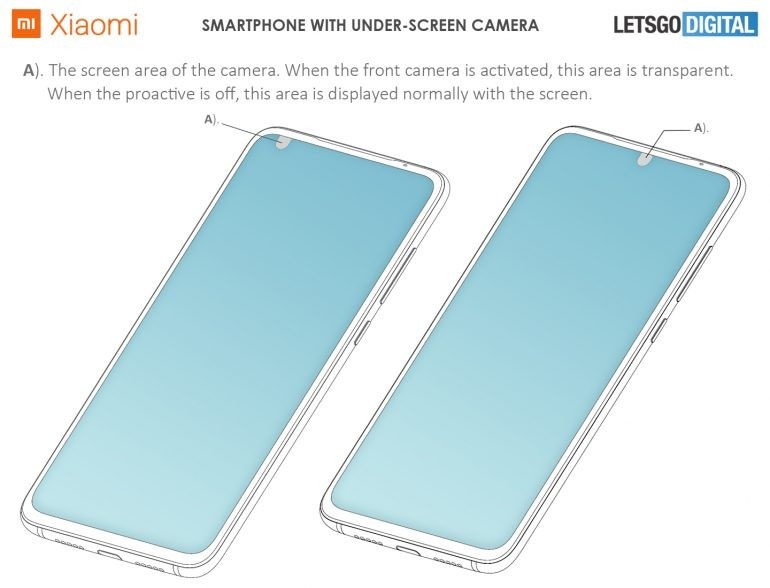 The patent further reveals that the phone will house a call receiver at the top, while the selfie camera could be placed on the top left or the middle of the phone. However, since this will be an under-display solution, it will only show up when the snapper is in use. At other times, this transparent area could go back to normal to bring an all-screen experience.

The patent also shows the phone's design from the back, with the device being shown to sport a triple camera set-up at the back. On the sides, there is shown to be a power button and volume rockers, while at the bottom, there's a speaker grill and a USB-C port. However, since we've seen Xiaomi house much fancier set-ups on current generation phones, it won't come as a surprise to see the company bump up the number of lenses on the camera set-up before the phone finally goes in for manufacturing.

Alternatively, it could also be true that the phone itself never gets to see the light of the day, with Xiaomi junking plans for the device altogether. For now, we can only speculate and hope that we get to see this smartphone soon.