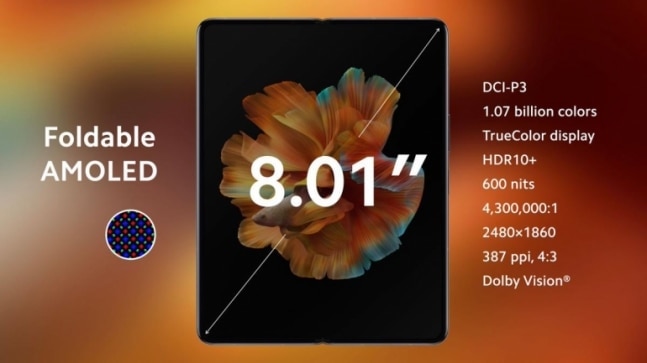 When unfolded, the Mi Mix offers a 8.1-inch AMOLED display.

Xiaomi on Tuesday launched the new Mi Mix smartphone in China. The smartphone was launched on the second day of a two-day virtual launch event hosted by the electronics maker in its home country. The event saw number of smartphones including Mi 11 Ultra, Mi 11 Pro and the Mi Mix being launched over a course of two days. The company also launched the Mi Band 6, its new projector and even a water humidifier during the event.

On top you get a 6.52-inch AMOLED display with 90Hz refresh rate. When unfolded, the Mi Mix offers a 8.1-inch AMOLED display with 2480x1860 resolution and 600 nits brightness. The display supports Dolby Vision and HDR10+. Xiaomi has equipped the smartphone with a desktop mode which also works like Samsung's Dex found on its premium smartphones and tablets. The desktop mode will allow users to use the Mi Mix Fold as a PC.

The smartphone is powered by Qualcomm Snapdragon 888 chipset coupled with 12GB and 256GB storage. It packs a 5020mAh battery with support for 65W fast wired charging. It is claimed to charge from 0 to 100 per cent in 37 minutes. The smartphone features quad speakers tuned by Harmon Kardon.

The smartphone features a triple rear camera setup including a 108-megapixel main sensor, a 13-megapixel ultra-wide sensor, a third 8-megapixel camera with 30X optical zoom and another 8-megapixel macro lens. The smartphone is also the first to come with a liquid lens which is believed to help phone better autofocus than the traditional smartphone camera lenses used today.

During the launch event, Xiaomi also unveiled its brand identity and logo which it claimed is based on the concept of 'Alive'. The new company logo is designed by world-renowned designer, professor of Musashino Art University and the President of the Nippon Design Center (NDC), Kenya HARA. The new logo has round edges and new 'Mi' topography. It retains the orange colour from the previous Mi logo. Xiaomi has announced that Black and silver colours will also be used to accommodate high-end product line applications.A