Xiaomi has teased the camera setup for the Mi 10 Youth Edition slated to launch in China. The standout feature is its 50X periscopic zoom camera. Xiaomi is coming up with a Mi 10 Youth edition soon and from what it seems, it's going to be another feature-rich midrange offering from Xiaomi. So far, Xiaomi has teased all the colour variants for the Mi 10 Youth Edition while also confirming a 50X zoom camera. While Xiaomi is yet to divulge further information on other aspects of the phone, it has torn down the camera arrangement, showing its latest periscopic zoom camera.

The Mi 10 Youth Edition will have a quad camera setup arranged in the trendy squarish hump design. While the three of those are expected to be similar to what we see on the Mi 10 Lite European model, the fourth camera is a completely special one. It's a 50X zoom camera that utilises a periscopic setup to achieve high levels of zoom.

The camera can zoom optically up to 5X and then it can extend the zoom levels to 10X, which is achieved using hybrid technologies. The advertised 50X is completely a digital solution that solely relies on image processing. 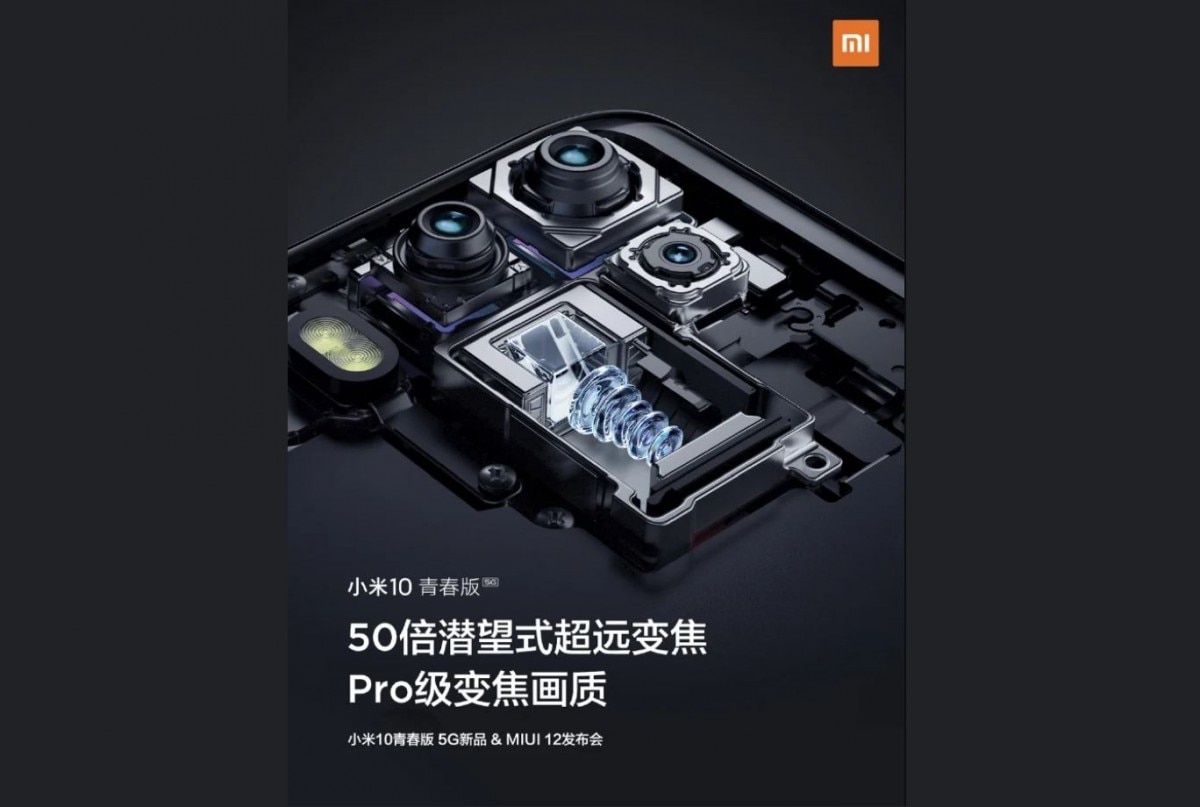 Xiaomi has shared a couple of image samples from the zoom camera on the Mi 10 Youth Edition and as teasers go, all of them look processing. The one in full 50X zoom has also been shown as a clear photo that retains all the details. Will that be the same for real-world conditions? We will have to wait for the phone to come out to check for ourselves.

There's a lot of expectations from the Youth Edition. The phone is expected to be quite similar to the Mi 10 Lite launched in Europe a few weeks ago. Hence, it is assumed that this phone will use a Snapdragon 765G chip and feature a large battery with 22.5W fast-charging system.

The Mi 10 Youth Edition is coming up with MIUI 12 in China, the latter being the latest iteration of Xiaomi's custom OS. MIUI 12 promises a lot of improvements in the UI section as well as Digital Wellbeing features. A lot of new themes and AOD styles are expected to debut with MIUI 12 and most of them are expected to reach the majority of the existing Xiaomi smartphones.

Xiaomi is also expected to release a Redmi Tab 5G in China that is also rumoured to be using a Snapdragon 765G chip, 30W fast charging, a 90Hz refresh rate display, 48-megapixel main camera and a new MIUI for Pad based on MIUI 12.