The features include video chapters, a streamlined player page, efficient and useful gesture controls, and others. 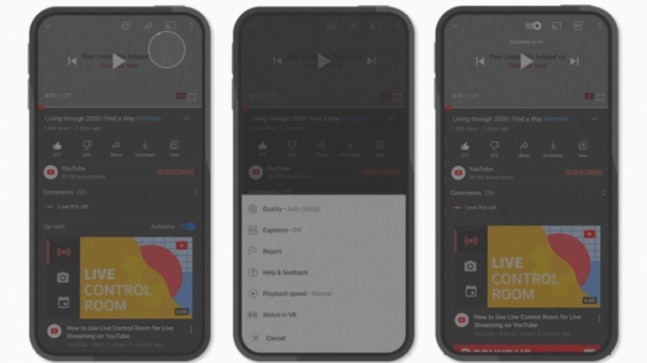 YouTube is rolling out new features for its Android and iOS Users. The features include video chapters, a streamlined player page, efficient and useful gesture controls, and others."With a global community of two billion people on YouTube, we're always looking for ways to make it easier to watch and interact with your favorite videos. Check out some of our favorite tips and tricks to get the most out of YouTube, including new updates you can try out starting today," YouTube said in a blog.

YouTube is expanding the Video Chapters feature that will make it easier for users to jump to a specific section of a video, rewatch a part, and more. "Today, we're extending this feature to include a new list view that you can find by tapping or clicking the chapter title in the player. You'll be able to see a complete list of all chapters included in the video you're watching, each with a preview thumbnail of what you'll find in that chapter. Save time by quickly jumping to the part you're interested in," the YouTube blog stated.

YouTube has moved the captions button (CC) to a more prominent location at the top of the Mobile video player. YouTube has done this to make the captions more accessible. It will easier for the users to switch it on and off instantly. The AutoPlay toggle too has been placed beside the CC button. This way users can see it right in front of their eyes and would not have to go down and switch it on or off.

Youtube is introducing enhanced gesture controls to give viewers more control over the videos they are watching on the app. Now users can enter or exit full-screen mode simply by swiping up and down. If you swipe up, the video will start playing in a landscape mode but if you swipe down the video will play in a portrait mode. "And if you'd rather see how much time is counting down vs. the time that's elapsed in a video, now you can simply tap the timestamp to switch back and forth," the blog said.

As the name suggests, YouTube will now start suggesting actions to users, which will prompt them to rotate their phone or play a video in VR if YouTube thinks you can have a better experience by rotating your phone. The company plans to roll out for suggested actions

Now coming to bedtime reminders, the feature was introduced long ago. The feature lets users set reminders at specific times to stop watching videos and go to be on time.