Food-delivery app Zomato on Thursday announced that the app will now have separate ratings of restaurants for dining and delivery. 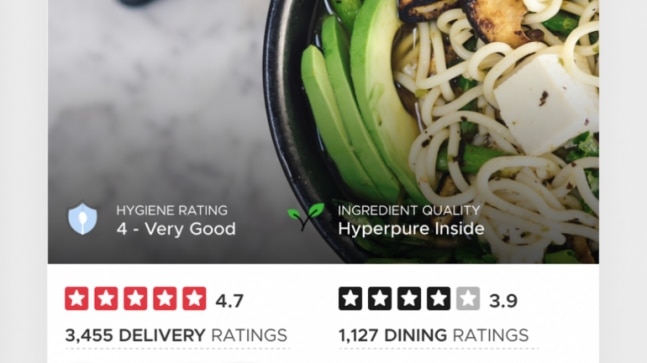 Food-delivery app Zomato on Thursday announced that the app will now have separate ratings of restaurants for dining and delivery. The company said in its blog that two experiences are entirely different for the customers and hence it should be denoted differently on the app. So when you start using the app again, you will find two different rating systems- the red one for delivery and black for dining.

Announcing the same, CEO Deepinder Goyal wrote on Twitter saying, "Earlier this year, we proposed a change in our restaurant rating system. Based on the unanimously positive feedback, we are getting rid of the unified rating for a restaurant and splitting it into a separate rating for Dining and Delivery." In a blog post, the company revealed that it will not disclose how the ratings are calculated as it is their most precious intellectual property"

Zomato has rolled out its new rating system in India, United Arab Emirates, and Lebanon. The company might roll out the feature in other countries too but they have not revealed anything about it so far.

"You will now see two ratings on the restaurant page telling you how users have rated food ordering and dining in experience with the chosen restaurant. The color scheme of black and red is retained throughout our app for ease of identification. The ratings will be contextual, i.e. when you are browsing restaurants to order food, you will only see the delivery rating indicated by red stars; similarly, when you are planning to go out, you will only see the dining rating indicated by black stars," Riddhi Jain, global head for new products, Zomato said in a blog post.

Zomato also shared the special measures it has taken to weed out fake or paid reviews along with an improved rating system. The company strives to bring genuine and trustworthy reviews and are trying to eradicate the bad actors in the system, who post reviews with nefarious intentions or demand free meals and cash in return for a 5-star review.

"With the most recent change in our algorithm, we have further beefed up our systems significantly (aided by machine learning) to reflect updated experience ratings, and to identify and remove fake reviews comprehensively. Our restaurant partners work extremely hard to ensure that every guest has a memorable experience. We don't want the hard work of our honest partners to get undermined due to a few bad actors in the system," Jain added.

Zomato will add a banner to label the restaurants who demonstrate "a repeated pattern of solicitation". This would help the users know that suspicious activity has been carried forward with respect to reviews by the restaurant.