Most Indians know the broad contours of the Flipkart story - a new economy start-up founded by two techies who could dream big, execute, compete against the powerful e-tailer Amazon, skirt around government regulations, and in a fairytale sort of an ending, sell the company to the world's biggest retailer, Walmart, for $16 billion.

Most Indians don't know the inner workings of Flipkart, its many setbacks, the great escapes from near-death, and its long list of characters, or people who joined and left since the company started in 2007. Business biographies, often, lionise the founders. But in the Big Billion Start-up, author Mihir Dalal skilfully avoids this temptation. The book is as much about Sachin and Binny Bansal - the founders - as it is about other professionals who played a stellar role in Flipkart's dramatic rise. 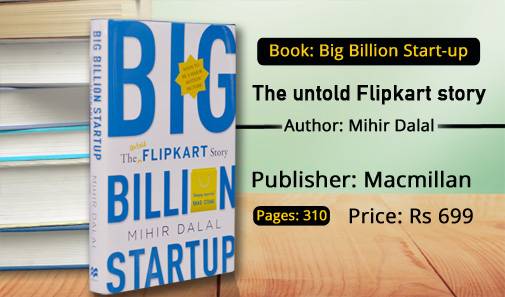 The book, therefore, is a study of personalities. Sachin Bansal was the big dreamer, given to grandiosity. He relied on gut feelings to arrive at decisions but wouldn't accept gut-based reasoning from other employees. He didn't possess inter-personal skills either; perhaps lacked what future-of-work proponents call 'emotional quotient'. This is what would ultimately lead to his fall in the eyes of senior employees and investors. Binny Bansal, on the other hand, was grounded. He relied more on his execution skills, was calmer of the two founders, and thereby more approachable.

Kalyan Krishnamurthy, who became Flipkart's CEO, had a ruthless quest for power. He comes across as a micro-manager, one who takes charge of day-to-day matters. He wouldn't get along with Sachin Bansal. Their world-views couldn't be more different. While Sachin was a technologist at heart and envisioned Flipkart as a tech company, Krishnamurthy viewed it as a retail company. While Sachin prioritised innovation, Krishnamurthy's priorities were business; he wouldn't stop at anything that fetched more sales. Flipkart's discount-heavy approach (which customers loved) would gain legitimacy under Krishnamurthy's watch.

Dalal also paints delightful portraits of other employees such as Sujeet Kumar (who built the company's book business as well as camaraderie) and Tapas Rudrapatna (with his long hair and tattoos, he brought in sex appeal; customer delight, too). There is also some bit about Lee Fixel, an executive from investor Tiger Global, the real phantom of Flipkart's opera. Sitting in the United States, he could pull the strings at will. Nearly every important decision needed his blessings.

In narrating the tension between technology and sales teams, between the Bansals and Krishnamurthy, between the aspirations of investors such as Fixel and employees who were treated as mere "resource", Dalal crafts the book as a study in office politics. In matured organisations, politics can be refined. In start-ups, it is crude. "The company became an intense political battlefield at the senior levels, hierarchical restructuring took place every few months. Senior executives would often be found locked in shouting matches. Roles were changed depending on the need of the hour. Most employees came to believe that they had played a pivotal role in the company's success, that they were indispensable to Flipkart. But suddenly, without notice, they would lose favour. Those who were put on a pedestal would be rudely pulled down," the author tells.

Nevertheless, the tensions and the politics didn't keep Flipkart from becoming India's biggest start-up sensation. It did many things right. The book is also a study on how to avoid the small company trap. In India, the small tends to remain small; most companies tend to remain corporate dwarfs because of a host of economic and non-economic factors. Flipkart managed to avoid the trap since early on, the Bansals hired bright young people and empowered them. Those who performed, were awarded with promotions, hikes, stock options. This culture of meritocracy turned Flipkart into a magnet for talent. The junior employees weren't really impacted by the company's toxic politics at the top. Flipkart also pioneered cash-on-delivery at the right time since the online payment ecosystem in India was broken. To maintain high service standards, it decided on holding inventory and in 2011, introduced a returns policy.

All these details make the book a must read for every entrepreneur, every employee wishing to work in a start-up. Lessons apart, the theatrical twists and turns in the fortunes of Flipkart are a thoroughly gripping narrative.