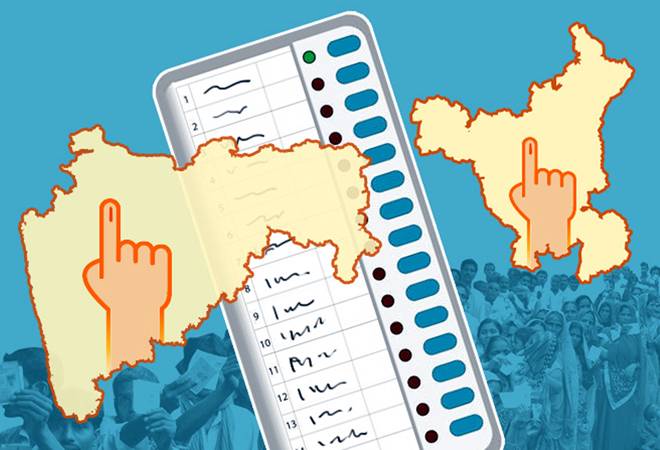 The BJP appeared set to retain power with a bigger mandate in Maharashtra, where it is in alliance with the Shiv Sena, and Haryana, as exit polls forecast a facile victory for the party in the two states and rout for its rivals led by the Congress.

Exit polls, broadcast soon after the polling ended, varied widely in their projection of seats for the rival alliances but an emphatic victory with more than two-third seats for the BJP-led NDA in Maharashtra and Haryana was their common theme.

The India Today-Axis exit poll projected 166-194 seats for the BJP-Shiv Sena in the 288-member Maharashtra assembly and 72-90 for the Congress-NCP alliance.

The exit poll by News18-IPSOS gave the BJP a near-majority on its own by predicting a whopping 142 seats for the party and 102 for its ally Shiv Sena. The Congress and NCP will bag 17 and 22 seats only, it has predicted.

The ABP-C Voter predicted 204 seats for the BJP-Shiv Sena and 69 for the Congress-NCP while the corresponding figures by Times Now were 230 and 48.

In Haryana, the extent of a BJP win was projected to be even more dominant.

The Times Now survey gave the BJP and the Congress 71 and 11 seats respectively.

The poll of polls brought out by the NDA gave the BJP and the Congress 66 and 14 seats respectively in Haryana, and 211 and 64 for the saffron alliance and the Congress-NCP in Maharashtra.

The BJP had brought the issue of Article 370 nullification and national security at the centre of its campaign with development works its state governments playing the second fiddle.

In 2014 the BJP and the Sena had won 122 seats and 63 seats respectively followed by 42 and 41 seats by the Congress and the NCP. All four parties had contested independently in the previous assembly polls.