"This is an exciting and momentous day for the Old War Office as we reach the highest point of the building and announce the official name of the project as 'The OWO'," says Gopichand P Hinduja, Co-Chairman, Hinduja Group 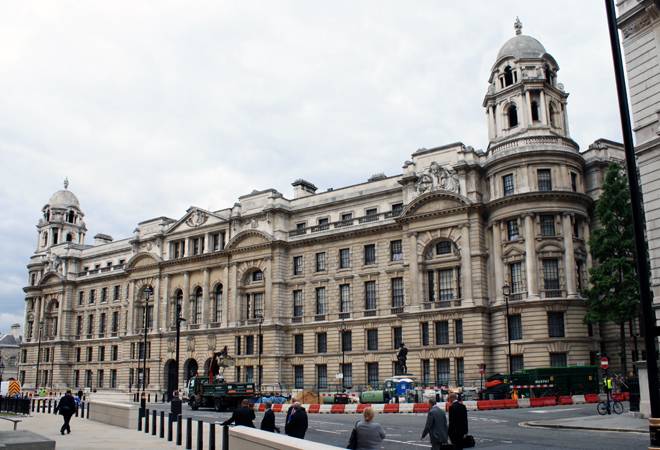 The Hinduja Group has announced an extension of its tie-up with Raffles Hotels & Resorts, involved in the transformation of former British Prime Minister Winston Churchill's Old War Office (OWO) building, in the heart of London into a luxury hotel.

An agreement signed by the London-headquartered conglomerate in June 2017 for Raffles to operate a 125-room and suites flagship hotel at the iconic heritage building in Whitehall was expanded on Thursday to cover 85 luxury residences on the site.

The Hinduja Group, owned by British Indian Hinduja brothers, alongside project collaborators Obrascon Huarte Lain Desarollos (OHLD), also officially unveiled its name as "The OWO" at a ceremony this week.

"This is an exciting and momentous day for the Old War Office as we reach the highest point of the building and announce the official name of the project as 'The OWO'," said Hinduja Group Co-Chairman Gopichand P Hinduja.

"After an exhaustive process, Raffles were selected above other leading global hotel brands as our partner to deliver a world-class hotel experience of peace and warmth. We are delighted to announce Raffles as operators of the branded residences, the first of their kind in Europe," said Hinduja, whose family topped the UK's annual 'Sunday Times Rich List' in 2019 with an estimated wealth of GBP 22 billion.

The OWO project is being developed by the Hindujas and joint venture partner OHLD through their special purpose vehicles. They had announced plans to restore and redevelop the Grade II listed Old War Office building, originally completed in 1906, into a luxury hotel in 2017.

The work on the project has been underway since then and reached the topping-out ceremony this week, which refers to reaching the highest point in the building, with the opening planned in two years' time.

OHL Chief Executive Officer Jose Antonio Fernandez Gallar said: "The Old War Office has been an ambitious and technically complex architectural and engineering project, and we are delighted to achieve this significant milestone as we progress towards the project's opening early 2022.

Sebastien Bazin, Chairman and Chief Executive Officer of Accor, of which Raffles is a part, said they were confident that the "sublime location" of the new hotel will make the list of the five most beautiful in the world, alongside Raffles Singapore.

Raffles is a beloved brand with British roots, named after the British statesman and founder of Singapore, Sir Thomas Stamford Raffles, so it is very fitting that Raffles is coming home to London and that this will be our first residential project in Europe," said Bazin.

The OWO building, which was sold by the UK's Ministry of Defence for 350 million pounds nearly six years ago, has formerly been used as the MI6 headquarters in several James Bond films, from 'Octopussy' to 'Skyfall'.

One of the four entrances to the building is referred to as The Spies Entrance, as it was used by members of MI5 and MI6 security services to enter the Old War Office discreetly when it was used as Churchill's base during World War II.