Kumaraswamy govt to face confidence motion on July 18: Is it advantage Congress in Karnataka? 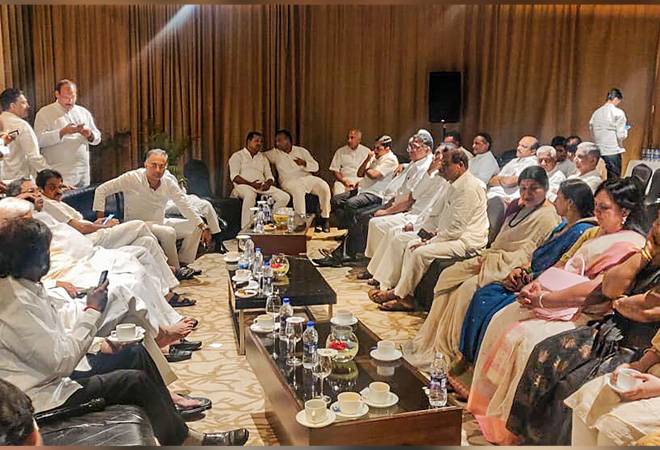 Even as the Congress and Janata Dal (Secular) continue appeasement meetings with 16 rebel MLAs of both the parties put together, the speaker of Karnataka Assembly Ramesh Kumar, announced that the house will meet on Thursday at 11 am to hold a floor test where Chief Minister Kumaraswamy will prove the strength of the coalition government. If we are to go by the current numbers, the ruling JD(S)-Congress coalition has 117 MLAs - Congress has 78, JDS has 37 and Bahujan Samaj Party 1 - in 225-member Karnataka assembly. One member is nominated.

Now with a total of 16 MLAs have resigned - 13 from Congress and 3 from the JDS, be it acceptance or disqualification either ways the strength of the ruling coalition will come down to 101 including the Speaker Ramesh Kumar who can vote in a floor test only if it ends in a tie. If the strength of the assembly goes down to 209 the magic number would be reduced to 105.

The Bharatiya Janata Party is confident of forming the next government with 105 of its own MLAs and support of two other MLAs taking its effective strength to 107 in the anticipation of HD Kumaraswamy losing the trust vote. While senior Congress leaders like Siddharamiah, G Parameshwar, DK Shivakumar have been holding several rounds of meeting with the disgruntled party MLAs to save the government, sources that Business Today spoke to shared a different scenario that the Congress party is working towards

Congress seeing this episode as a 'Cleansing-Act'

A very senior Congress leader that BT spoke to said if the coalition government fails to get the numbers on Thursday - "It will a cleansing act, we will know who are the ones who are loyal and who are not". The same source said while the senior leadership outreach has been overwhelming, the inherent trust deficit with the MLAs has to end if the party wanted to come back to power on its own in the state. MLAs from Congress who resigned include Byratibasavaraj (K R Puram), S T Soma Shekar (Yeshwanthpur) and Ramalinga Reddy (BTM Layout) ,Ramesh Jarkiholi (Gokak), Pratap Gowda Patil (Maski), Shivram Hebbar (Yellapur), Mahesh Kumathalli (Athani), BC Patil (Hirekerur), The JD(S) MLAs are A H Vishwanath (Hunsur), who recently resigned as the party's state chief, Narayana Gowda (K R Pet), and Gopalaiah (Mahalakshmi Layout).

In a bid to save the government, Congress's central leaders are said to have proposed alternate names for the chief ministership to HD Devegowda to navigate the ongoing crisis including the name of veteran Congressman Mallikarjun Kharge who lost his seat to BJP's Umesh Jadhav in the recently held LokSabha election. However, the suggestion did not go well with HD Kumaraswamy and even some of the party's own leaders indicated the same source. Also, it is almost an open- secret on the discord within the party over deputy CM Dr G Parmeshwar 's lack of mobilisation skills and any incremental benefit to the party but however enjoying a position of power while other leaders are on the damage control mode. State leaders like DK Shivakumar, Siddharamaiah and Dinesh Gundu Rao are opposed to any dilution of their powers in the party said the source.

State Congress is also said to be now more comfortable with the idea of sitting in the opposition with Siddharamaih as the leader of opposition in the house. The party which was greatly disappointed with its performance in the last assembly election is now looking to fix its problems at the grass-root level.  The move could also pacify and appease Congress leaders at constituency and booth levels, who were opposed to the very idea of a coalition with JD(S), a result of which was clearly pronounced in the results of the Lok Sabha elections from the state.

While Thursday could be the d- day for the state government, the Supreme Court on Tuesday is also set to address substantial questions of law pertaining to Article 164, 190 and 361B of the Constitution of India arising out of the present situation where resignations have been submitted and also disqualification has been sought for a set of same MLAs of Congress.

Also Read: After Karnataka, 10 out of 15 Congress MLAs join BJP