Not only 2019, the entire decade belonged to largecaps Largecap stocks have been ruling the roost in the ongoing market rally in 2019. Take into account the past decade, and they have still outperformed the midcap and smallcap stocks by a wide margin. In theory, midcaps and smallcaps outrun largecaps in the long-term. However, in the decade gone by (between 2009 and 2019), the benchmark Sensex that represents the top 30 bluechip companies returned 133 per cent compared to 109 per cent and 48 per cent, respectively by BSE Midcap and BSE Smallcap indices during the same period.

"However select stocks always show linear growth in the long-term. In fact many Sensex / Nifty stocks were midcap stocks long time ago. So, one should always play on small and midcap segment in terms of stock picking," he adds.

Over the last 10 years, the Sensex returned the most (29.6 per cent) in 2014 owing to prime minister Narednra Modi's big win in 2014 general elections, followed by 27.5 per cent in 2017 and 25.1 per cent in 2012. The 30-share index gained 15.3 per cent so far in 2019 until Friday compared to mere 5.9 per cent jump in 2018. The index delivered negative returns in only two out of the last 10 years - 25.1 per cent drop in 2011 in the wake of high inflation, higher interest rates, depreciating rupee, and slowing economic growth amid leadership crisis in the UPA regime and 5 per cent decline in 2015 due to dismal corporate earnings and BJP government's loss in Delhi and Bihar state elections. The BSE Midcap and the BSE smallcap indices have delivered negative returns in four out of last 10 years. The indices have been losing momentum for the last two years. Corporate governance issues, market regulator Sebi's mutual fund recategorisation mandate and the ongoing slowdown in the economy weighed on sentiments surrounding the midcap and smallcap stocks. Brace for volatility if you invest in smallcap and midcap companies. If you had invested Rs 1 lakh in a mutual fund that follows BSE Smallcap as an underlying, it would have become Rs 74,987 by the end of 2013. But four years of consecutive gains from the start of 2014 to the end of 2017, would have spiked the returns to Rs 2,13,319. 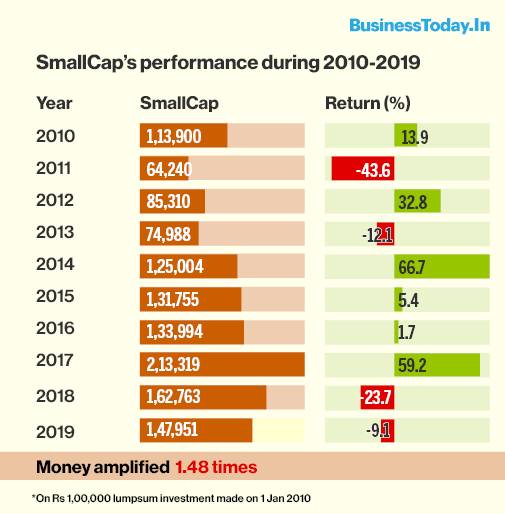 Chokkalingam says volatility in the smallcap and midcap segments will stay over the next decade as well. "The segment is vast with 75 per cent listed stocks belonging to this category. Issues of governance, retail inventors' ignorance in stock selection and disadvantage of being smaller in size in managing stressful economic conditions will make this segment highly volatile and cyclical over the next decade. However, once again a few stocks from this segment will emerge as Sensex / Nifty stocks within next 10 years."

If an investor doesn't want direct equity exposure, he or she can start an SIP in midcap and smallcap mutual funds. However, only 30-40 per cent of the portfolio should be in equities (direct or indirect), rest to be divided among fixed income securities and gold and real estate. "Investors with average risk profile should keep minimum 30-40 per cent in safe fixed income securities such as bank deposits and bonds, 30-40 per cent in equities, and rest in gold and real estate. It would be better to avoid fresh exposure to real estate and rather add gold at this juncture," advises Chokkalingam.