PE/VC investments saw a significant uptick in November at $4.8 billion compared to $1.8 billion in the same month last year. This amounts to an increase of 2.8 times in the value. Also, it was 50 per cent higher compared to October which saw investments worth $3.2 billion. According to the IVCA-EY monthly PE/VC roundup, the total PE/VC investments in India, year-to-date, now stands at $44.2 billion, which is 18 per cent higher than the previous high of $37.4 billion recorded in the entire 2018. 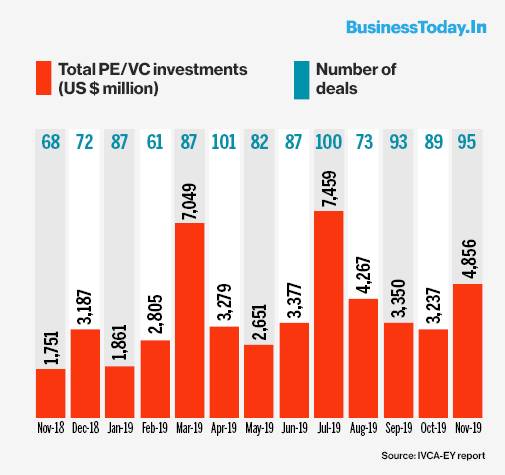 The month also recorded 15 exits worth $1.4 billion, twice the value of exits recorded in November 2018 ($676 million). The growth was primarily because of two large open market deals accounting for $1 billion of total exits in November 2019. "While exits have been subdued for most of 2019 with year-to-date exits aggregating to $10.5 billion compared to $27 billion over the same period last year, activity has picked up slightly with the revival of deals in the open market on the back of improvement in capital market sentiment," Soni added. The largest exit in November 2019 saw Bain Capital and GIC sell their combined stake of 14.6 per cent in Genpact Limited for $625 million followed by Carlyle selling its 3 per cent stake in SBI Life Insurance Company Limited for $393 million. Open market exits were highest at $1.1 billion across five deals, accounting for 82 per cent of total exits by value. November 2019 also recorded the highest monthly value of open market exits in two years. While open market exits have witnessed a revival in conjunction with improvement in capital market performance, there have been no PE-backed Initial Public Offerings (IPOs) for three consecutive months since August 2019, added the report. Technology sector ($625 million across two deals) was the top sector accounting for 46 per cent of all exits by value.