The revenue earned was through donations for organising Annadanam (free food for pilgrims), sale of prasadam including 'appam' and 'aravana' and cash and coins received as donations to the deity 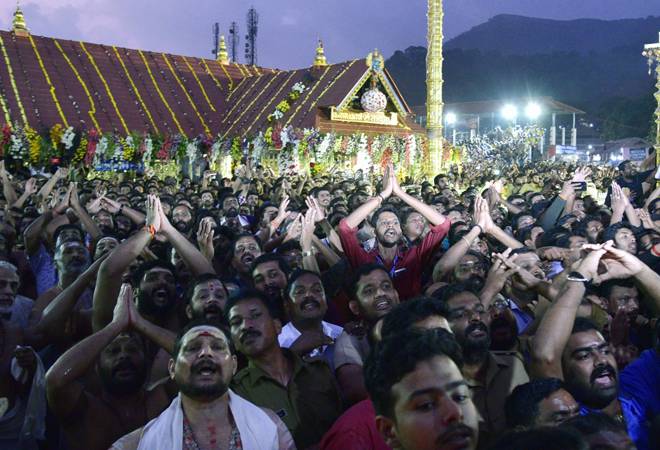 Twenty-eight days into the annual two-month-long pilgrimage season, revenue collection at Sabarimala crossed Rs 104 crore on Sunday as against Rs 64 crore in the same period last year, the Travancore Devaswom Board said. The TDB, which manages the hill shrine, said the temple earned Rs 104.72 crore revenue after it opened for the annual Mandalam-Makaravilakku pilgrimage on 17 November.

"As of today, the total revenue since the temple opened on November 17 is Rs 104.72 crore. Last year on the same day it was Rs 64.16 crore. We have to count coins worth Rs five crore. We will calculate the value by weighing the coins with the permission of the court," TDB president N Vasu told reporters here.

The revenue earned was through donations for organising Annadanam (free food for pilgrims), sale of prasadam including 'appam' and 'aravana' and cash and coins received as donations to the deity, he said.

Last year, the temple and TDB had suffered huge revenue losses as the shrine and nearby areas witnessed massive protests by a section of frenzied devotees and right-wing political parties over the September 28, 2018, Supreme Court order, allowing entry of women of all ages into the shrine.

However, the Apex Court had on November 14 this year said a larger seven-judge bench would re-examine various religious issues, including the entry of women into the Sabarimala temple and mosques and the practice of female genital mutilation in the Dawoodi Bohra community. This prompted the state government to put on hold the implementation of the apex court order of September 28, 2018, resulting in more flow of devotees to the shrine.

The Board has also commenced the sale of 'appam' and 'aravana' from Pamba, Vasu said. He also said the temple authorities have arranged for the sale of prasadam through counters at Pamba after receiving the nod from the 'Thanthri' (head priest).

Govt likely to sell 28% stake in BEML through strategic disinvestment