A man from Varanasi is making it big in Rs 80,000 cr beverages market

Manpasand is changing the rules of the game with a strong local push. 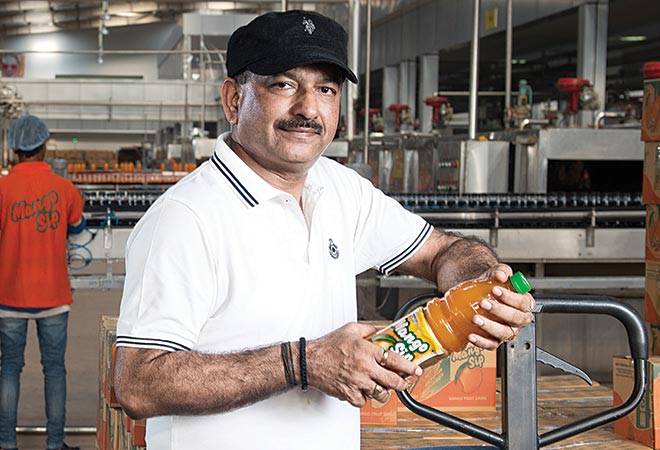 For Manpasand Beverages founder Dhirendra Singh, adding manufacturing muscle to the Rs700 crore Indian beverages company is not a big deal. He has built two plants in the middle of an industrial zone in Vadodara, Gujarat, in the last 12 years. The third will be completed next year, a part of a massive expansion plan under which Manpasand, the maker of 'Mango Sip' and 'Fruits Up', is building four manufacturing facilities to add to its existing five plants. The company, it seems, is on a roll, while fighting off competition from the aggressive MNCs - Coca-Cola and Pepsi - for the Rs70,000-80,000 crore Indian beverages market.

If Manpasand's past growth is an indication, the MNCs have serious competition on their hands. The turnover of the company, which set up its first plant in Vadodara in 2005, has grown at a compounded annual growth rate, or CAGR, of 42 per cent in the last six years. One of its directors says the company today generates a profit equal to its revenue in 2011, when he first invested in the company. The revenue rose 36 per cent to Rs717 crore in 2016/17 while net profit went up by 44 per cent to Rs73 crore. In the first quarter of 2017/18, net profit rose 25 per cent to Rs36 crore.

The story of Dhirendra Singh, who belonged to a family of farmers in Varanasi, Uttar Pradesh, with no background in business, is similar to that of Parle's Chauhan brothers or Nirma's Karsanbhai Patel. "It was my stint in ONGC Vadodara that encouraged me towards entrepreneurship. In the mid-90s, I befriended a Tetra Pak executive, who told me about the fruit juice industry and helped me create the Mango Sip brand," says 55-year-old Singh. Frooti and Jumpin of Godrej were the only packaged mango juices in the market then. Mango Sip was launched in eastern UP in 1997. The company managed to build a network of 25-30 distributors in a year by offering higher margins. During the first few years, Singh outsourced manufacturing and focused on studying the market. Later, he came up with the idea of tapping the rural market, where there was hardly any competition. After gaining foothold in north and west regions, he set up the company's first manufacturing unit.

In addition to Vadodara, the company has plants in Varanasi, Dehradun and Ambala. The four plants under construction will come up over the next 12-18 months and double the overall capacity. Manpasand's network spans 24 states, four lakh retailers, 2,500 distributors and 250 super stockists. The company recently teamed up with Parle Products, which has a network of 45 lakh retailers, to cross-promote brands. The company raised Rs500 crore through a qualified institutional placement last financial year. It had come up with an initial public offer in mid-2015 at Rs320 a share. The stock had risen 45 per cent to Rs807 this year till August 16, taking the companys market cap to Rs4,600 crore.

One reason for the company's success is creation of vast networks in semi-urban and rural markets, where the big beverage companies had minimal presence. Manpasand now earns 75 per cent revenue from these markets. The second is launch of products at lower price points - Rs5 & Rs10 - and that also in a wider pack range (PET and tetra paks). Another strategy involved building relationship with distributors. Every day, the company hosts around 10 distributors and their families at its Vadodara plant.

After listing in 2015, Manpasand has adopted an aggressive strategy for urban markets too. It has tied up with SPAR, Metro Cash & Carry, Reliance Retail and Walmart. Singh, realising the difficulties of making a mark in big cities, which are crowded with MNC brands, came up with healthier alternatives for carbonated beverages. The launch of Fruits Up range, with 5-10 per cent real fruit pulp, was a masterstroke at a time when both Coke and Pepsi were struggling due to consumers' shift to healthier drinks.

"We wanted to come up with a carbonated beverage with fruit juice and without any synthetic base and made up of natural ingrediants. After two-three years of research, we launched Fruits Up. We can go anywhere in the world with this product as an alternative to existing colas," says Singh. Fruits Up grossed a revenue of Rs180 crore in the last financial year. Mango Sip contributes 80 per cent to the company's revenue. In May 2015, the company entered into packaged tender coconut water with Coco Sip. In health drinks, Manpasand ORS is already available in the North East; the company soon plans to go pan-India with it.

Manpasand has also entered the traditional Indian drink segment with Jeera Sip. Manpasand is targeting a revenue of Rs1,000-1,200 crore this financial year and Rs5,000 crore by 2022. Singh is also drawing up plans for backward integration--- including farming and fruit processing. The big companies sure have a lot to worry.