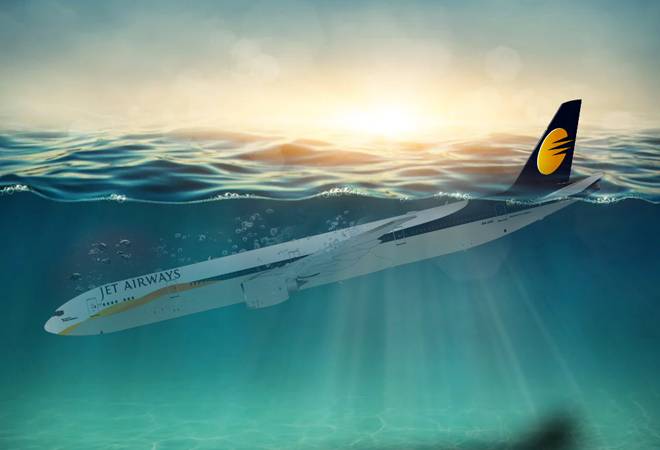 Why has Jet Airways stopped flying?

The country's first private airline was battling a critical cash crunch and its lenders refused to risk releasing the bulk of the promised interim funding without a new investor on board. Due to the liquidity situation, the airline was not able to repay its lessors, leaving the bulk of its fleet grounded. This, in turn, meant that there was little cash generation - not good news for an airline already burdened with a debt of over Rs 8,500 crore. When the banks rejected the airline's request for emergency funding of Rs 400 crore on Tuesday, unable to pay for fuel and other services, it had to ground its remaining five planes too, at least temporarily.

How much money does Jet Airways need?

Getting the grounded airline back in air, and clawing back its lost market share, will require at least Rs 7,000 crore. Jet Airways' engineers, pilots and senior management have not been paid salaries since January and the dues till March reportedly add up to Rs 600 crore.

Also Read: Why Jet Airways is a bigger nightmare for bankers and government than Kingfisher was

Who can rescue Jet Airways?

Banks, already burnt by Kingfisher Airlines in the past, have left it to potential investors to revive the airline by infusing fresh capital. The SBI-led consortium of lenders claims that they are reasonably hopeful of a successful stake sale. On Thursday morning, the lenders issued a statement saying that "the best way forward for the survival of Jet Airways is to get the binding bids" from the investors that had submitted expressions of interest last week. The shortlisted bidders - Etihad Airways, Jet's largest shareholder, TPG Capital, Indigo Partners and National Investment and Infrastructure Fund (NIIF) - have been issued bid documents on April 16. However, if the stake sale does not go through, the airline may even land in bankruptcy court.

The airline said it would await the bid finalisation process by the lenders that was likely to bring in fresh equity. The bank-led resolution process is still underway and expected to end by May 10. Jet Airways' future course of action hinges on the outcome of stake sale.

What happens to JetPrivilege members?

The over 8 million members of the airline's loyalty programme, JetPrivilege, at least have no cause to panic. The company yesterday announced that the value of their members' JPMiles are "secure and remain intact" and members can continue to redeem their JPMiles on free flights, hotel stays, fuel and merchandise options as before. Jet Privilege added that it is a separate, independent entity, and is a part of the Etihad Aviation Group.

What is the government's stand?

The Ministry of Civil Aviation (MoCA) has said that it will support the resolution process within the existing regulatory framework. In a series of tweets on Wednesday, the ministry clarified that the DGCA and other regulators are monitoring the situation to ensure that all existing rules regarding refunds, cancellations, and alternate bookings are followed strictly. Any passenger complaints can be reported to the #AirSewa portal or mobile app.