The fast-growing compact sedan segment in India's automobile industry is set for heavy competition with Tata Motors and Ford India unveiling their products and Hyundai India joining in today. 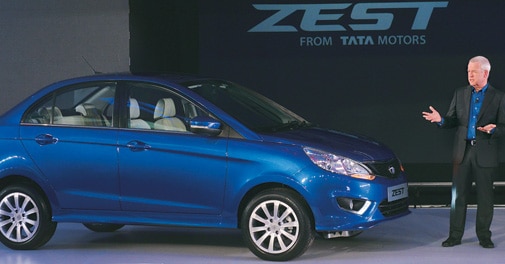 Tim Leverton, chief(advanced and product engineering), Tata Motors at the unveiling of Zest.

The fast-growing compact sedan segment in India's automobile industry is set for heavy competition with Tata Motors and Ford India on Monday unveiling their products and Hyundai India joining in on Tuesday.

Tata Motors introduced its compact sedan Zest, along with its Bolt hatchback, ahead of the Auto Expo to be held from February 5 to 11. Ford made the global unveiling of its Figo Concept, which will be its first compact sedan offering in India.

The new entrants will take on Dzire from Maruti Suzuki and Amaze from Honda, which are priced between Rs 5.69 lakh and Rs 7.77 lakh.

Compact car sales in India are expected to grow from about a million units last year to roughly 2 million units in 2018, according to newly appointed Ford India President Nigel Harris.

"After the success we had with the Figo and Ecosport, we needed to come up with another strong product, which is what we are doing with Figo Concept," he said. While he did not reveal when the car would be available, Harris said, "It is closer to production and we are not several years away."

Consumers are more demanding than ever, wanting and expecting more from their cars, even if they are first-time buyers, Ford Motor Company Global Product Development Vice President of Engineering Kumar Galhotra said.

"With the Figo Concept, we are showing that choosing a compact sedan does not mean compromising on premium design or smart solutions," Galhotra said.

Tata Motors is pinning its hopes on the Zest, which will be available in both petrol and diesel versions, along with the Bolt, which will come only with petrol engine.

The diesel variant of Zest will be powered by a 1.3 litre engine.

The company will start selling these new cars by the second half of the year, Tata Motors President Passenger Vehicles Ranjt Yadav said. These will add to the existing line up of Indica and Indigo.

"The journey has just started and with these two new vehicles we would like to increase our market share," Yadav said, adding there are no plans to phase out Indica and Indigo.

Zest will be the second product in the sub-four metre compact car segment, after the Indigo CS.

Adding to the competition will be the compact sedan version of Hyundai's Grand i10, which the company will unveil on Tuesday.

According to sources in Hyundai Motor India Ltd, the car will be launched around March.

Nissan rolls out Datsun GO, may be priced below Rs 4 lakh