"We are looking for various opportunities. Recession is the time when you can break opportunities to invest," Hinduja Group India Chairman A P Hinduja told reporters on the sidelines of Auto India at Greater Noida. 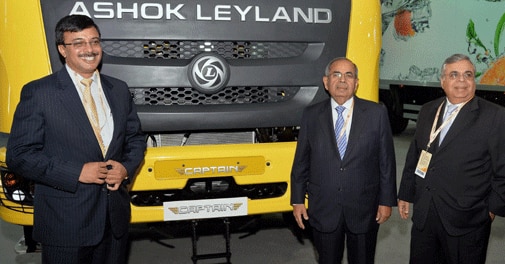 G P Hinduja and A P Hinduja of Hinduja Group along with Vinod Dasari, Managing Director, Ashok Leyland, at the Ashok Leyland stall at the Auto Expo 2014 in Greater Noida on Thursday. Shirish Shete/PTI.

Looking for opportunities in India despite economic slowdown, diversified Hinduja Group on Thursday said it would invest a billion dollars (about Rs 6,200 crore) across sectors like real estate and media.

"We are looking for various opportunities. Recession is the time when you can break opportunities to invest," Hinduja Group India Chairman A P Hinduja told reporters on the sidelines of Auto Expo at Greater Noida.

"We are looking at various different sectors for investment which we are offered by various investment bankers. Very soon, you would see that we may target few more investments," he said.

When asked as to how much could be the amount of investments, he said: "Over all investment will be about a billion dollar."

He did not share a timeframe for these investments.

On sectors where the group plans to make these investments, he said it could cover real estate, health sector, media, power and others.

The group already has presence in sectors such as banking & finance, transport, energy (oil & power) as well as technology, media and telecom.

Bullish on the long-term potential of India, Hinduja Group Global Chairman G P Hinduja said the group is sticking with its plans for the country.

"We are a long term player. We do not see this downfall a permanent one. So whatever has been targetted we have been sticking to that," he said.

On the group's progress in the power sector, he said it is confident of meeting the target of 10,000 MW power as its power plant at Vishakhapatnam is set for commissioning by the end of April or early May.

"We went through lots of hardships but finally it is completed and now there are three brown(field) projects which are in the pipeline, which we would be completing. Our target of 10,000 MW remains intact without scaling down," he said.

G P Hinduja further said: "Because of the recession we have been able to find ready made projects which we call brown (field) projects and three of them would be completed very soon. This will fasten our target of completing 10,000 MW."

When asked about the current political climate in India and as to who could form the new government, he said: "In my opinion whosoever comes, it should be a stable government. The stable government is always good for economy and for the new investors to come in."

He also took a neutral stand on who would be a better leader for India-Rahul Gandhi or Narendra Modi.

"They both have pluses and minuses. Mr Modi is coming with lot of experiences in administration, in implementation.

He has proved himself. Here (with Gandhi) there is youth and zeal and enthusiasm and he has grown up in a family which is embroidered with politics. So we have to watch the scene. The scene is very excitinng to see what is happening."

Merc my words, they are a hit!