Whil the multi-purpose vehicle Mobilio will lock horns with the likes of the Maruti Ertiga, Chevrolet Enjoy and Mahindra Xylo, the Jazz will take on the Maruti Suzuki Swift, Hyundai i20, and Volkswagen Polo. 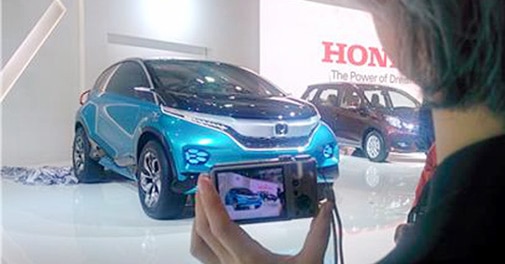 A shot of the Honda pavillion at the Auto Expo 2014. PHOTO: Reuters

Honda has unveiled two new models, Mobilio multi-purpose vehicle and an all new Jazz hatchback, at the 12th Auto Expo.

The Mobilio which is a multi-purpose vehicle is the third vehicle after Amaze to be based on Honda's popular hatchback Brio's platform. It has three rows of seats and can seat seven people.

It is set to lock horns with the likes of the Maruti Ertiga, Chevrolet Enjoy and Mahindra Xylo and is likely to be priced competitively between Rs 8 lakh and 10 lakh.

The Jazz, on the other hand, is a premium hatchback that will take on the Maruti Suzuki Swift, Hyundai i20, and Volkswagen Polo. It is expected to be priced between Rs 6 and 8 lakh.

While the Mobilio and Jazz will be available in both petrol and diesel versions, it is the latter that is most likely to have a majority share in sales.

Honda's diesel engines - first introduced in the Amaze last year followed by the City - have received a lot of appreciation in India.

"We have set a challenging sales target of 300,000 units annually by financial year 2017 and we are committed to support this expansion by introducing new products and technologies," said Takanobu Ito, president and CEO, Honda Motor Company, Japan.