"We very much support India's ambitious goal for solar energy, and stand ready to speed this expansion with additional financing," US President Barack Obama said. 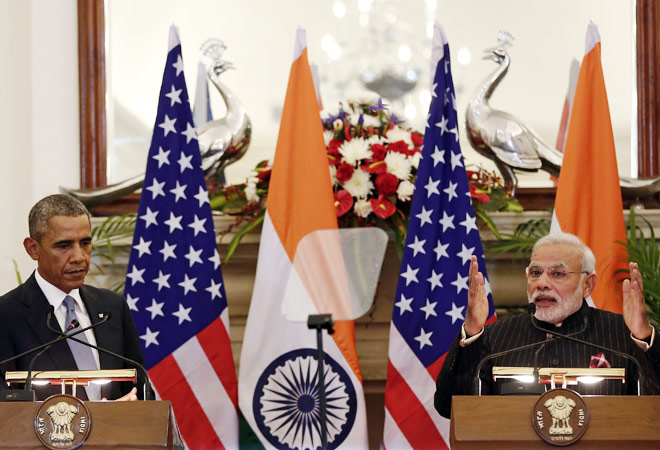 The country is the world's third-largest greenhouse gas emitter and often acts as the voice of the world's developing countries in United Nations talks on everything from climate change to economic cooperation.

The government is reluctant to commit to emission targets on the ground that this could hinder economic growth, which is vital to lifting the country out of poverty. Instead, PM Modi has made it a priority to expand the country's renewable energy capacity and lessen the need for polluting fossil fuels.

"We very much support India's ambitious goal for solar energy, and stand ready to speed this expansion with additional financing," Obama said in a joint press conference with the Prime Minister on the first day of his three-day visit to the national capital.

The country is seeking investments of US $100 billion over seven years to boost the domestic  solar energy capacity by 33 times to 100,000 megawatts.

The UN asked governments on Thursday to submit plans to cut greenhouse gas emissions as the building blocks of a deal due in Paris in December to limit global warming, after scientists said 2014 was the hottest year on record.

"The prime minister and I made a personal commitment to work together to pursue a strong global climate agreement in Paris," Obama said, adding, "As I indicated to him, I think India's voice is very important on this issue."

Modi said a deal between Washington and China committing to a peak year for emissions did not put pressure to do the same on India, where industrialisation is far behind its larger neighbour and where hundreds of millions have no electricity.

The US Export-Import Bank is exploring projects for a $1 billion clean energy financing for companies willing to ship equipment from the United States to India.

First Solar and SunEdison Inc are two US solar companies that already have sizeable businesses in the country, and together with local firms, are expected to invest $6 billion in India in the financial year ending March 31, 2015 and $14 billion in the 2015-16 financial year.

To further mobilise private capital for the clean energy sector, the US Agency for International Development will install a field investment officer in the country this summer, the White House Press Office said in a statement after the summit.

India-US CEO forum to focus on Make in India