India does not face the prospect of being compelled to get into a military alliance with the US. And yet, India is being trusted by the US in the matter of transfer of technology. 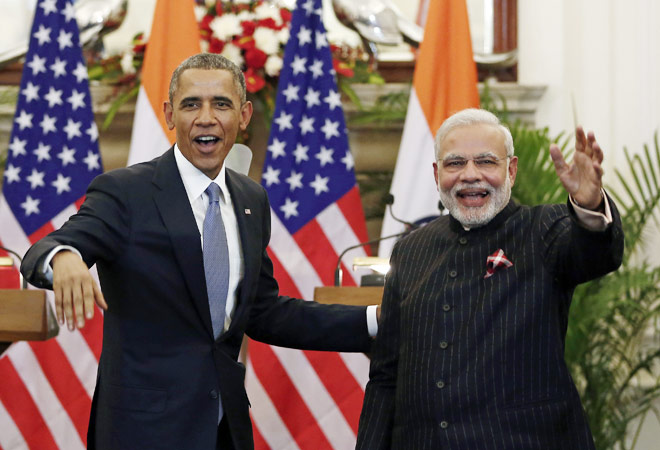 There is little doubt that Indo-US convergence on a worldview of global economy and geo-politics has registered a decisive advance with the special visit to India by President Obama as the chief guest for the Republic Day parade.

Post-Cold War, it was right to expect that the relationship between India and the US, representing the largest democracies of the world, would make a new beginning with the flavour of an understanding that exists between two 'natural allies'. Its progress was bound to be slow and uneven, however, as the baggage of the past did burden both sides.

If the two countries today seem poised for big-time collaboration as major players in a globalised economy and as major stakeholders in a shared geo-political strategy, this is because much water has flown under the bridge since a unipolar world order emerged with the demise of the Soviet Union. The two countries need not look back from here.

Prime Minister Modi has described the relationship as a 'natural global partnership' and President Obama has voiced his happiness that the Indo-US relationship had reached a 'new level'.

Three big changes have occurred in the meantime. India has clearly come out of the inhibitions that it carried as a hangover from the era of non- alignment. The process was initiated successfully by PV Narsimha Rao, and has found fruition in Narendra Modi's regime.

Secondly, US policymakers have shifted from their stance of regarding Pakistan as their 'blue-eyed boy' who got them victory in the anti-Soviet armed campaign in Afghanistan, to an acceptance of the reality that time had come for them to de-hyphenate Pakistan from the Indo-US grid.

This shift began with the visit of Prime Minister Modi to the US and found conclusion in the clear American message given to Pakistan on the eve of President Obama's visit to India, to wind up all terrorist camps operating inside that country.

Lastly, and this is something of far reaching import, the US is now firmly in favour of getting India on board as a friend in strategising for the geo-political scene on the horizon. The US knows India would not get pushed into an adversarial mindset towards it.

India does not face the prospect of being compelled to get into a military alliance with the US. And yet, India is being trusted by the US in the matter of transfer of technology.

The Americans have seen how a very visible Sino-Pak axis was now embracing defence collaboration as well. India consequently, has become far more important in the US scheme of things.

This progress towards convergence of the kind we are seeing now is the result of the intervention made by the US President and the Indian Prime Minister personally to facilitate crucial agreements relating to the civil nuclear deal, defence production, and the South Asian situation.

President Obama waived the insistence on tracking the nuclear material while India mitigated the liability burden of the suppliers by agreeing to create a corpus for the insurance cover, even as the legislation on the subject was to be maintained.

President Obama clearly attributed the deepening of Indo-US relationship to the strength and initiatives of Prime Minister Modi. On the issue of global terrorism, there is behind-the-scene consolidation of joint efforts and also, perhaps, a course correction on the part of the US as far as the appreciation of the problem of cross-border terrorism facing India is concerned.

All this is going to be tested soon enough as the events in the Pak-Afghan belt unfold themselves.

India has expressed resolve to help Afghanistan and reiterated that action had to be pursued against all terrorist groups.

The nation needs to acknowledge the clarity, conviction and leadership that Prime Minister Narendra Modi has brought to bear on the conduct of economic and foreign policies in his rule. The governance at home will decide how quickly the investments by foreign and home players start yielding results in terms of development and employment generation. The regime has certainly put national security on a much stronger footing than before.

(The writer is a former Director, Intelligence Bureau)