Obama says US keen to step up trade with India; talks on Bilateral Investment Treaty resume

Both countries decided to resume talks on the Bilateral Investment Treaty and the 'Totalization Agreement', which will benefit millions of Indians working in the US. 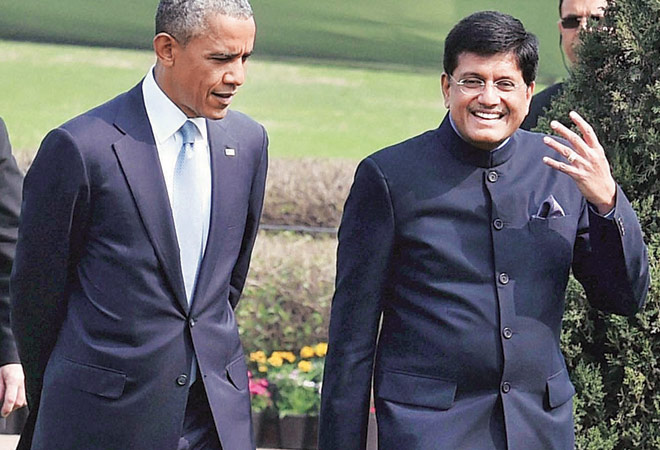 US President Barack Obama with coal and power minister Piyush Goyal arrives for planting a sapling after paying tribute at Rajghat, New Delhi, on Sunday.

US President Barack Obama said on Sunday that the US is keen to step up its fast-growing trade with India. "In the last few years, trade between our two countries increased by some 60 per cent to a total record of $100 billion. We want to trade even more," he said at a joint press conference here with Prime Minister Narendra Modi.

Both countries decided to resume talks on the Bilateral Investment Treaty (BIT) and the long-pending 'Totalization Agreement', which will benefit millions of Indians working in the US with regard to social security taxes. As per estimates, Indian IT professionals in the US pay more than $1 billion annually towards social taxes. BIT aims at protecting investment in each other's country.

The two nations have been discussing the pact since 2008. Obama also welcomed the economic reforms being pursued by the Modi government. "We welcome the reforms that the Prime Minister is pursuing to make it easier to do business in India. The trade and economic partnership must focus on improving the daily lives of our people," he pointed out.

Modi said, "President Obama and I agree that a strong and growing economic relationship is vital for the success of our strategic partnership. Economic growth in our two countries is becoming stronger. Our business climate is improving. This gives me great optimism about our economic ties."

Obama also affirmed his commitment to enhancing India's 'voice and vote' in global financial institutions like IMF. "Obama and Prime Minister Narendra Modi emphasised the importance of strengthening international financial institutions, including the International Monetary Fund," said a joint statement issued after a meeting between the two leaders. India has been pressing for higher voting rights in IMF, which would reflect its growing influence in world economy.

Breakthrough for India, US in civil nuclear deal