Cyrus Mistry of Tata Sons and David M Cote from Honeywell will co-chair the high-profile meeting. Industry captains from Indian and the US will attend the meeting. 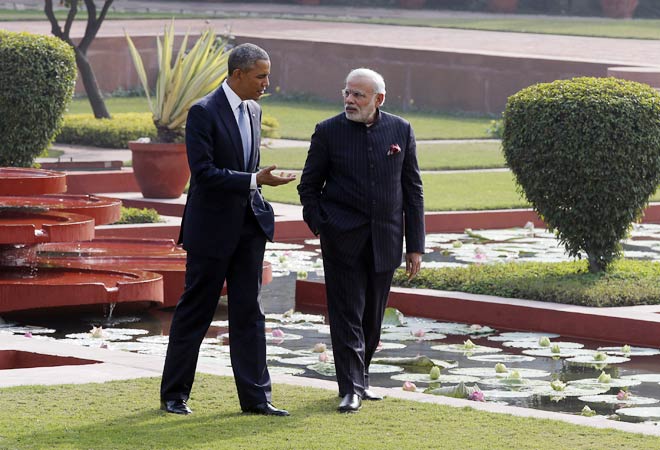 Trade and economic issues, including visa, totalisation pact and impediments hampering investments, are likely to figure at Monday's US-India CEO Forum meeting, which will be jointly addressed by visiting US President Barack Obama and Prime Minister Narendra Modi.

Finance Minister Arun Jaitley and Commerce and Industry Minister Nirmala Sitharaman are also expected to attend the meeting, which among other things is likely to focus on 'Make In India' campaign and ease of doing business.

Cyrus Mistry of Tata Sons and David M Cote from Honeywell will co-chair the high-profile meeting. Industry captains from Indian and the US will attend the meeting.

Obama, who arrived in the national capital on Sunday on a three-day visit, and Modi will interact with CEOs.

The forum is likely to discuss bilateral business ties, particularly in the light of US being a major potential source of manufacturing investments.

Critical issues, including visa impediments for professionals, intellectual property rights and bilateral investment treaty too may be discussed, sources said.

The meeting is significant in the light of 'Make-in-India' initiative, which seeks to make the country a hub for global manufacturing, design and innovation.

India has already relaxed foreign investment caps and norms in various sectors including defence, insurance and pharmaceuticals. It also took a slew of other initiatives with a view to improving the business climate and attract foreign investment.

India has received $13.28 billion FDI from the US between April 2000 and November 2014. America is the sixth largest investor in India.