While autonomous driving is a major theme at the International CES gadget show, cars that use futuristic sources of energy are potentially much closer on the horizon 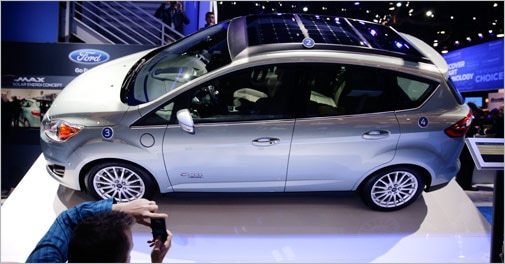 While autonomous driving is a major theme at the International CES gadget show, cars that use futuristic sources of energy are potentially much closer on the horizon.

Ford Motor Co. showed off a prototype solar hybrid car called the C-MAX Solar Energi, which has a gas engine along with rooftop solar panels that also power the engine. The car is designed to park under a 15-foot-tall carport made of a thin magnifying glass called a Fresnel lens that concentrates the sun's rays onto the panel to efficiently generate electricity. The carport isn't portable. So the car has to stop and recharge.

Seven hours of sunlight gives a full charge - the average amount of light in a typical American city, according to Michael Tinskey, Ford's associate director of vehicle electrification and infrastructure.

While the car is being tested on streets now, engineers have more to figure out. For example, the carport is set up to be flat, making it vulnerable to weather. 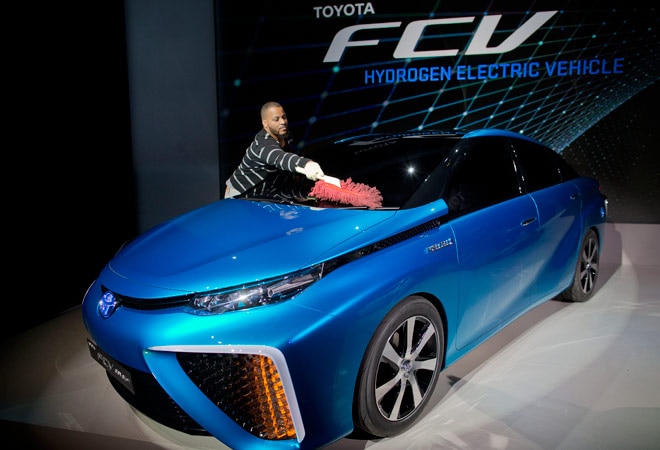 Also on display is Toyota's hydrogen fuel cell vehicle, called FCV for now. It will go on sale next year in the U.S. With a battery that uses hydrogen stored in a 5-kilogram (11-pound) tank and oxygen that rushes in through the front grill, the electric engine vehicle can get 300 miles while only emitting water and water vapor.

The main issue for eco-friendly owners will be finding enough hydrogen refueling stations to drive a decent range. California has approved $200 million in funding to build 20 fueling stations by 2015 and 100 by 2024. Toyota says as little as 68 stations will support 10,000 vehicles in the state.

The car's hydrogen power source is harvested in a chemical process involving natural gas. It is already being used in industrial processes like oil refining, and there are pipelines zig-zagging beneath major cities like Los Angeles, said Jared Farnsworth, senior engineer of powertrain system control for Toyota in North America.

With hydrogen prices expected to be about $6 to $10 per kilogram - equivalent to $30 to $50 to fill Toyota's FCV - there won't be much savings for owners used to getting hybrid vehicle mileage, especially because the car is expected to be priced from $50,000 to $100,000 when it goes on sale next year. But the Earth might thank them later.

Innovations that grabbed eyeballs at CES 2014