Here's our pick of the top five innovations being displayed at the ongoing Consumer Electronics Show that are likely to make it big this year. 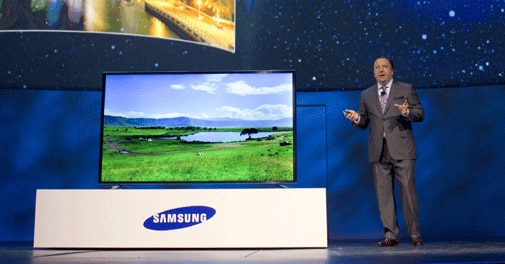 The ongoing Consumer Electronics Show at Las Vegas sets the stage for innovations and technological trends for 2014. The big names including Intel, LG, Samsung, Sony, Qualcomm, Panasonic, Toshiba and many others have announced a plethora of devices ranging from TVs with flexible display and 4k resolution to wearable gadgets, which will be unveiled at the show. Here's our pick of the top five innovations that are likely to make it big this year.

1. Bend It: This is a prototype but prototypes show the future. At CES 2014, Samsung has showcased a 85-inch TV that it calls a 'Bendable TV'. The demo unit at the show switched between a flat panel and a curved screen at the touch of a button. It had a mechanical system pushing out the edges of the screen to achieve the transformation.

2. Smart Platform: The popular mobile platform webOS, which was owned by Palm and then bought by HP, is now a TV platform. LG has refreshed the software and plans to load it on its smart TV sets. LG's webOS-powered TV sets will have a home screen with three main "boards". The first will be today's board, including menu selections tailored to the viewer's choice. The 'My Content' board will show all media from connected devices while the third board will feature frequently visited websites and services.

3. Ultra high performance: The war between the two Korean giants, Samsung and LG, never seems to end. Both showcased innovations at the CES. They both had something in common too. Both had unveiled their 105-inch curved ultra high definition (UHD) TVs. Samsung's U9000 series includes a 65-inch and a 55-inch curved TV. (UHD stands for 4k resolution.)

4. 4k laptops: As expected, 4k displays have become big at CES this year. Interestingly, Toshiba has taken this resolution beyond TVs by bringing the 4k display to machines running Windows 8.1. Of the two laptops Toshiba announced, one is the 15.6-inch Tecra W50, which can go up to a resolution of 3840x2160. This notebook is designed as a portable workstation for professionals working with graphically-intensive applications.

5. Wearable Tech: With Google Glass and smart watches creating a buzz in 2013, there were high expectations in this domain as well. Pebble has added a metal cast to its smartwatch and released a $250 steel smartwatch. LG has forayed into this space with Lifeband Touch and Heart Rate Earphones, a practical, health-focused wristband that is paired with a smartphone, which is then connected to the ears.