Many capital-starved companies, reluctant to tap a market with little appetite for fresh equity, are dusting off listing plans in the expectation that elections starting next month will usher in an investor-friendly government. 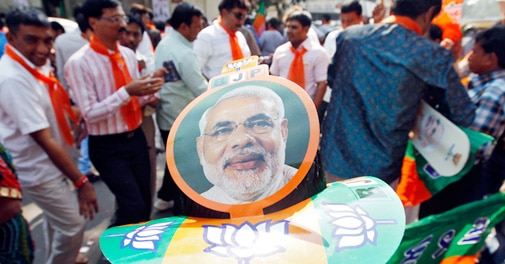 After waiting nearly two years, GMR Energy plans to file an initial public offering (IPO) prospectus in coming days to raise about $250 million, sources with direct knowledge of the deal said, starting what bankers hope is an election-fuelled revival in equity raising.

Many capital-starved companies, reluctant to tap a market with little appetite for fresh equity, are dusting off listing plans in the expectation that elections starting next month will usher in an investor-friendly government headed by Bharatiya Janata Party (BJP) leader Narendra Modi.

Fresh equity sales in India slowed sharply in 2013 to $9.4 billion, down from $15 billion in 2012 and a record $31 billion in 2007, as slowing economic growth, corruption scandals and delays in project approvals battered sentiment.

Investor hopes that the BJP, led by its prime ministerial candidate Modi, will prevail in the election sent the stock market to a record high this month.

"A stable government after the election, which should be able to end the policy paralysis and remove some of the hurdles in doing business, will be a major enabling factor in reviving the IPO market," said Harish HV, head of corporate finance in India at advisory firm Grant Thornton.

While the United States is in the midst of an IPO boom, a market rally that began in September in India has yielded little fresh issuance.

"Barring a few firms, there's nothing fundamentally wrong with names that were looking to do an IPO for the last couple of years but were unable to," said the head of India equity capital markets at a European bank, declining to be named.

GMR Energy, a unit of GMR Infrastructure (GMRI.NS), wants to list in order to raise capital and provide an exit option for investors such as Singapore state fund Temasek Holdings, the sources with knowledge of the deal said.

They declined to be named as the IPO plans were not yet public. A spokesman for GMR did not immediately respond to a question seeking comment.

The BJP is perceived to be more business-friendly than the ruling Congress-led coalition, which is on the back foot over corruption scandals that have stifled decision-making.

If the BJP wins with a strong mandate - it is almost certain to need support from coalition partners to form a government - bankers said they expect a slew of companies to file share sale documents over the next couple of months.

The election runs from April 7 to May 12.

Mahanagar Gas, a joint venture of Britain's BG Group Plc, India's state-run GAIL and the Maharashtra state government, is likely to file papers in June for an IPO that would raise about $150 million, sources said. Mahanagar Gas Chairman Shaleen Sharma could not be reached for a comment.

Great Eastern Energy Corp, a London-listed Indian coal bed methane gas producer, is gearing up to launch an IPO in India to raise about $50 million soon after the election, a source with direct knowledge of the matter said. A company official could not immediately be reached.

GMR Airport, another arm of GMR Infrastructure, is also considering an IPO in the third quarter of 2014, sources said. Last year, it hired banks including Citigroup and JPMorgan for a listing to raise about $300 million.

The last sizeable listing in India was by search provider Just Dial, which raised about $165 million in June 2013. It was the biggest deal since Bharti Infratel $750 million IPO in December 2012.

A revival in Indian equity issuance would bring relief to investment banks, many of which had to fire staff to cope with a dearth of deals and shrinking fee pool.

Some bankers however said investors would be cautious about IPOs coming to the market this year.

"Modi and his government will not come to power with a magic wand in their hands," said a senior investment banker with a large European bank. "While there are expectations of a turnaround, investors will definitely ask lots of difficult questions before deciding to buy new papers from India."

Modi as PM would harden stance on China, Pakistan