Four BJP leaders and their stance on the economy 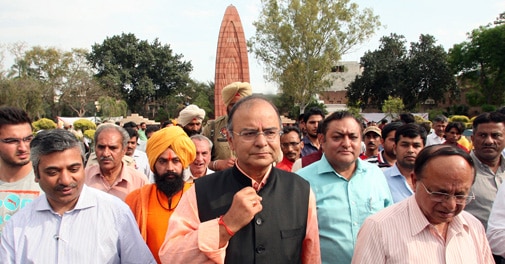 Arun Jaitley, Arun Shourie, Piyush Goyal and Rajnath Singh are seen as part of Bharatiya Janata Party prime ministerial candidate Narendra Modi's inner circle. Modi, should the BJP-led National Democratic Alliance win today, is widely expected to depend on these four for advice on all issues national --- economic to strategic. Business Today's research team pulled out what they have said in the past sourced from various news reports. This is not comprehensive but gives a view on how they think.

Arun Jaitley
Expect him: To make big-bang reforms in the economy and interior security matters
Jaitley, tipped to be either home or finance minister if Modi forms the next government, is focused on investments. "You will have to re-start the investment cycle. You will have to, both in terms of policies and procedure, give an impression that it's now easy to do business in India. You make five big clearances, some big-ticket clearances," he said in a Reuters interview . "The new government should give direction in five broad areas: infrastructure, building suburban and new urban townships, massive skill development programmes, promoting tourism, and lowering costs for business," he added. Manufacturing should also be in focus, according to Jaitley. "The government should take at least two measures that "indicate you are willing to make India a low-cost manufacturing centre."

Piyush Goyal
Expect him: To favour and push reforms in sectors such as energy, mining, banking and capital markets
Goyal, a chartered accountant by training and BJP's national treasurer, is in favour of investments, like Jaitley, to drive employment. "Once the investment cycle gets re-established, jobs will be created and you will see the supply side being addressed, which is the correct way to tackle inflation," told The Economic Times. "You cannot address inflation by hoping to choke demand by increasing interest rates and in the process kill the economy and growth. So I clearly see Modiji giving a major thrust to creating manufacturing capability and thrust to infrastructure development."

On the position of Raghuram Rajan as Reserve Bank of India governor, Goyal has  said he sees no need for change. "No government can dictate to the central bank. It's an autonomous body and he holds a constitutional position. We don't have any likes or dislikes," he insisted in an interview to Bloomberg. There has been speculation of differences between the BJP and Rajan. ""The Reserve Bank is fulfilling its duty to make an effort to reduce inflation, but sadly the government has been so lousily managed in the last few years. A government led by Modi will repress the concerns of any central bank leader."

Arun Shourie
Expect him: To push changes that have a long-term, strategic impact on India's position in a global economy
Shourie, a former editor, has time and again advocated deep reform that will change the direction India has been moving. "We must put excellence at the top. There is no place in this world for a second rate country and there should be no place for a person who puts in second rate effort. We must change our own conduct," he said at the India Today Conclave in March this year. "Since 1991, we have seen sectors which have missed the eye of the state have progressed… like IT. On the contrary, education which was directly under the government's eye continues to lag behind."

Rajnath Singh
Expect him: To represent the traditional, cadre-based views of BJP in a right-wing coalition
Singh is in favour of deepening FDI policy, albeit in a calibrated manner.
He is in favour of status quo on India's stand not to be the first side to use nuclear weapons in a conflict. "The no-first-use policy for nuclear weapons was a well thought out stand of the NDA government led by Atal Behari Vajpayee. We don't intend to reverse it," Singh told Hindustan Times in an interview.

What Narendra Modi can do for start-ups