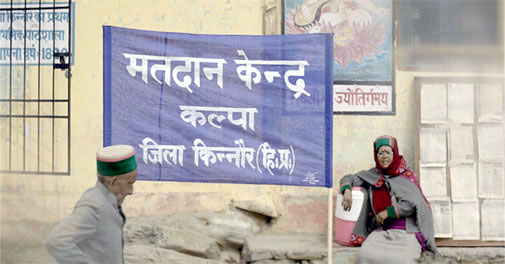 A grab of Shyam Saran Negi walking to the voting centre taken from the Google video.

Shyam Saran Negi, 97 years old, lives in Kalpa, a small town in Kinnaur district of Himachal Pradesh. He is the first voter of independent India and has never missed an opportunity to exercise his right to vote since 1951 when India had its first ever general elections.

The true story of Shyam Saran Negi is part of Google India's brand new digital campaign that seeks to encourage Indians to vote.

With the forthcoming general elections just a few weeks away, Abhijit Avasthi, National Creative Director, Ogilvy India, who is the brain behind the campaign, says the idea was to encourage young digitally savvy Indians to vote through an inspirational story.

"The 2014 general election promises to be a landmark in the history of this nation. Perhaps more than any other election in the past, this election is about capturing the imagination of millions of both first-time as well as experienced voters. This video has been developed to inspire Indian voters to vote this election. The story of Shyam Negi is a testimony of Indian voters' belief in the power of democracy," adds Sandeep Menon, Director, Marketing, Google India

Avasthi of Ogilvy says that his team found out about Negi in the typical Google style by doing a Google search. The search result for the oldest Indian voter gave them information of Negi which was two years old.

"There was no update about him and we were wondering whether he was alive," says Avasthi, who finally decided to send one of his young team members to Kalpa, to find Negi's whereabouts.

The video which went online Thursday evening has already received 1,135 likes on YouTube.

Unlike most ad films whose duration is between 10-30 seconds, the Google campaigns are longer, at least 3-4 minutes long.

"Since the Google campaigns are essentially meant for the digital platform, and duration is not a restriction there, we like to tell compelling stories," explains Avasthi. The idea here is not to just talk about the brand, but also engage with the consumers through good content.

The PledgeToVote campaign of Google India is the second campaign based on true life stories.

The first was also a true story on the reunion of two childhood friends who got separated during partition. An emotional story, the campaign highlighted the various features of the Google search engine. The campaign has till date got around 12 million hits online.

In an era of immense brand clutter it has become imperative for advertisers to look beyond traditional brand messaging to connect with their target audience.

Tata Global Beverages' Jago Re campaign for Tata Tea, where the brand has talked about various election-related corrupt practices is yet another example. The brand's most recent initiative is the 'Power of 49' campaign, where it has tried to encourage the women of India to vote, by saying that 49 per cent of the Indian electorate comprises of women.