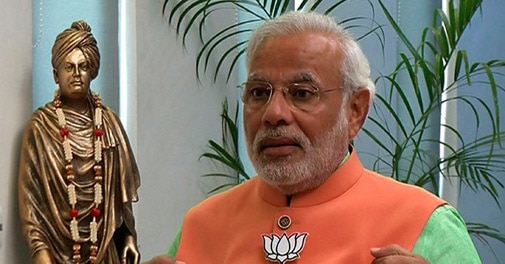 BJP's prime ministerial aspirant Narendra Modi has emerged as the "most searched politician" online, not only in Maharashtra, but also across the country, followed by AAP leader Arvind Kejriwal, a Google survey report said on Monday.

According to a survey conducted in Maharashtra, which goes to the polls on Thursday, until April 19 (for a period of 90 days), Modi is the most searched politician followed by Aam Aadmi Party (AAP) chief Arvind Kejriwal.

The late Shiv Sena chief Bal Thackeray was also searched during the period, but not as much as the above mentioned politicians, the survey said.

Among the Thackerays, people follow Raj Thackeray who leads the Maharashtra Navnirman Sena (MNS) more keenly than his estranged brother Uddhav Thackeray who heads the Shiv Sena, the survey said.

While Uddhav is be the least searched person from among the Thackeray clan, more people searched for him than Maharashtra Chief Minister Prithviraj Chavan, the survey said.

Among other politicians also searched, Nationalist Congress Party (NCP) chief Sharad Pawar led the pack, while Nitin Gadkari of the BJP, Sanjay Nirupam of the Congress, Praful Patel of the NCP and Priya Dutt of the Congress were also actively searched by people in Maharashtra, the Google survey said.

Election dates, voter registration, Election Commission and election cards have been searched aggressively in Maharashtra after the announcement of election dates, the survey said.

Crisil sees economy growing at 6.5% in next 5 years