Rumblings of dissent against Rahul Gandhi after poll drubbing

Milind Deora, a former union minister, said Gandhi's secretive coterie of advisers, who had no electoral experience, "did not listen" to party cadres and legislators. "We felt our voices don't matter. This has to change," Deora told the Indian Express. "It is not the advisers alone. The people who take the advice also have to bear responsibility." 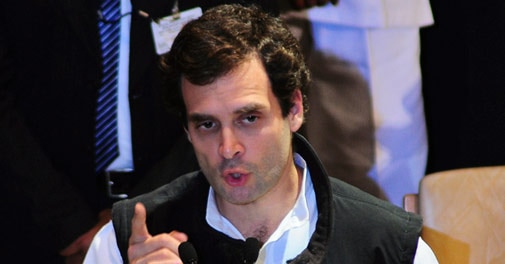 Dissenting voices in Congress party have for the first time lashed out at the campaign team of Rahul Gandhi, who led the 128-year-old party to the worst electoral defeat in its history last week.

A decade in power for Congress ends on Monday when Narendra Modi takes over as Prime Minister. Modi won a historic majority on May 16 and the defeated party now faces the prospect of a long spell in opposition.

Rahul is the scion of the Nehru-Gandhi dynasty that has been at the heart of the Congress party since independence from Britain in 1947. The family has given the country three Prime Ministers, along with Sonia Gandhi, the power behind the throne in the outgoing government of Prime Minister Manmohan Singh.

On Monday, Congress's top leadership instinctively closed ranks around Rahul and his mother, party president Sonia, and rejected their offer to resign. But anger at the dismal performance has since begun to bubble over, amid concerns the party, and the dynasty, may never recover.

Milind Deora, a former union minister, said Gandhi's secretive coterie of advisers, who had no electoral experience, "did not listen" to party cadres and legislators.

"We felt our voices don't matter. This has to change," Deora told the Indian Express. "It is not the advisers alone. The people who take the advice also have to bear responsibility."

Although Deora did not offer names, the remark appeared to be aimed at Rahul Gandhi himself, who rarely, if ever, endures any criticism from party colleagues.

Several other high profile lawmakers have spoken out against the campaign this week, saying there was a rift between grassroots workers and party leaders. One outgoing minister, K.V. Thomas, called on Rahul's charismatic sister Priyanka Gandhi to play a bigger party role.

During the campaign, Gandhi surrounded himself with a small group of mostly foreign-educated trusted aides who operated out of his central Delhi home, which was often felt to be out of bounds for others in the party.

"They do not relate to the issues of the people, then how can they give advice?" P.C. George, chief whip of the Congress-led coalition in the southern state of Kerala told Reuters.

"Rahulji is not competent to fight Mr. Modi," he said, using a term of respect for Gandhi, while describing the blistering national defeat as the "Waterloo of the Congress Party."

At the Congress headquarters in Delhi, party functionaries said the party's top leaders were shocked by the result because they were out of touch with grassroots workers during the campaign.

Congress got a meagre haul of 44 seats in the 545-member lower house of parliament. The BJP's tally was a record 282.

Rahul Gandhi, the great-grandson of India's first Prime Minister Jawaharlal Nehru, may have led a disastrous election campaign, but he is unlikely to be ousted because without the Gandhis, many in Congress fear the party would break up.

On Monday, Sonia and Rahul both tendered their resignations in an act of self-criticism that ended with the party's top brass voting that they should stay. Sonia Gandhi told the meeting she would overhaul the party and come back fighting.

"Most of all what we need is for our party to accept that unless we undertake some structural changes, we will not be able to meet the serious challenges we face," she said.