I raised my hand to be Microsoft CEO, says Satya Nadella

India-born Satya Nadella believes his role as CEO would enable him to make an impact in an increasingly "software-powered" world and drive innovation. 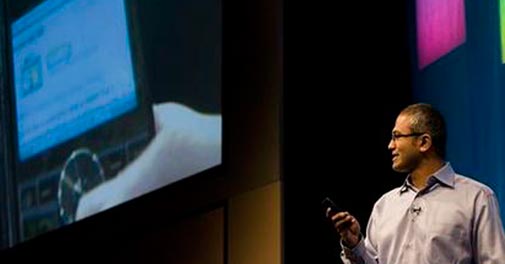 India-born Satya Nadella said he "raised his hand" to take up the top job at Microsoft as he believed his role as CEO would enable him to make an impact in an increasingly "software-powered" world and drive innovation.

A 22-year old Microsoft veteran, 46-year-old Nadella was on Tuesday named the new Chief Executive Officer of the technology giant who will be supported by co-founder Bill Gates in shaping technology and product direction.

Gates, previously Chairman of the Board of Directors, will assume a new role on the Board as Founder and Technology Advisor and will devote more time to the company.

In an interview posted on the company's website, Nadella said he had thought "very deeply" about why he wanted to be the CEO and his answer was that he wanted to make an "impact."

On why he wanted to be CEO of Microsoft, "is the question I asked myself very deeply when the opportunity came up.

"When I think about the core of why I am here, it is about impact. In a software-powered world what is a better place than Microsoft, in terms of being able to take all of this, human potential that we have in 130,000 people and apply it to a world that is rapidly becoming more software driven.

That opportunity is what fundamentally drives me, got me to take this. I raised my hand for this job," Nadella said.

Later Nadella appeared for a brief interview with Microsoft's customers and partners where he stressed that he will focus on innovation in taking Microsoft forward as technology continues to shape everyday life.

"This business of ours is exciting because in some sense it does not really respect tradition in what we have done in the past. It is all about the innovation going forward... The co-evolution of hardware and software is going to define a lot of what is going to happen," Nadella said.

"We are living in a cloud-first, mobile-first world," Nadella said in the webcast.

"That is the world we are building for, and all of this is going to be mediated by software," he said.

"Experiences such as online meetings at work, how I connect and communicate with my friends and family, how I consume content, entertainment, all are going to be changed by software and these are the places where?Microsoft is squarely focussed on bringing our innovation," Nadella said.

The Hyderabad-native said innovation makes the technology industry and their work "exciting".

"...Everyday you come to renew yourself with innovation.

What you have done in the past is in the rear view, you need to think" on what new one can do in future, he said.

Calling himself a "lifelong learner", Nadella said he gets energised when he sees people achieve "high standards in anything."

He said even though he has been at Microsoft for 22 years, there is a lot for him to learn "both internally and externally."

"Parts of Microsoft will be new to me. There is lot to learn," he said, adding that over the next few months he would hit the road and meet Microsoft's customers, partners and investors.

"Being in touch with perception and grounded in our reality is what's going to help us do our best work going forward," Nadella said.

In a separate video, Gates said he was "excited" with the choice of Nadella as CEO and as the technology industry changes, Microsoft has to innovate and move forward.

Nadella "has got the right background to lead the company during this era," Gates said.

He said in the various business groups that Nadella has worked in, he "has driven innovation and got architectures put together that meet the needs" of the company's customers.

Gates revealed that it was Nadella who asked him to spend more time at the company.

"I am thrilled that Satya has asked me to step up, substantially increasing the time I spend at the company. I will have over a third of my time available to meet with product groups and it will be fun to define this next round of products working together," he said.

"There is lots of opportunity in front of us and it is exciting that we have got a strong leader to take us there," Gates added.