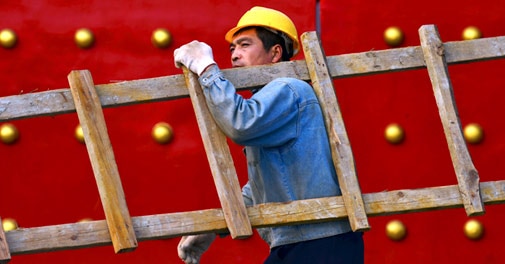 In 1980, the economies of China and India were almost the same in terms of gross domestic product (GDP). India's GDP per capita was, in fact, slightly higher than that of its much larger eastern neighbour. Then, the Chinese economy grew at an average rate of 10 per cent between 1980 and 2010, leaving India far behind. In fact, Chinese manufacturing sector is presently eight times the size of India's.

S. Ramakrishna Velamuri, Chair, Strategy & Entrepreneurship Department, and Academic Director of Centre for Entrepreneurship and Investment, Europe International Business School, has a different argument on why China succeeded the way it did when it launched its business-friendly policies and, more importantly, why India could not have replicated the success even if it had embraced similar policies.

He was speaking at the Strategic Management Society Conference on Strategic Leadership - an emerging market perspective at Indian School of Business, Mohali. (Left to right): Akbar Zaheer, Jay Anand and S Ramakrishna Velamuri
The biggest advantage, in his opinion, that China had in the early 1980s was human capital.

In 1982, the literacy rate in China was 64.4 per cent, compared to India's 37. The average years of schooling in China was far higher than that in India then. In every measure, China was far better than India.

In terms of healthcare - be it infant mortality, life expectancy - China had a far healthier population, he said. Then there is gender gap. China has traditionally been a society that had encouraged gender equality. India, even today, fares badly on that parameter.

Recent studies have ranked China at No.61 in terms of gender equality as against India's 113 among 134 nations. In another attribute - economic empowerment of women - China is holds the No.50 spot, compared to India's 131 today. Labour force participation by women in China is 74 per cent, while it is just 34 per cent in India. In women's education, China is at No.85, against India's 121.

If a strong human capital is the reason that catalysed China's rapid growth, there are a few less attributed reasons for the sustainability of the growth.

Jay Anand, Professor of Strategy at Ohio State University, gave two interesting reasons involving strategy for it. He said that multinational companies approached China and India very differently. They saw India as a large market for their products, while China was seen as a manufacturing base for supply to the rest of the world, he said. This, he added, also explains the large difference in foreign direct investment (FDI) flow into the two countries.

Anand also said that China's approach to acquiring technological expertise was very different. Through policy, it not only insisted that foreign companies share the technology with local partners but efforts were also made to ensure that this knowledge was absorbed by local engineers efficiently. The compensation package was designed in such a manner that the engineer who had acquired technical skills from a foreign company got better emoluments if he moved to a local company and shared his knowledge.

Akbar Zaheer, Professor in Strategic Management, University of Minnesota, shared a few other reasons, political stability being one. He said that the Chinese were paranoid about political instability, especially after the collapse of the erstwhile Soviet Union. "They have a great sense of importance for political stability," he said.

Also, the decision-making in China is very localised. Zaheer quoted a businessman saying it took four and half years in India to start a business, three years in USA and just 18 months in China because decision-making is very local and fast. He also said that bureaucrats in China were incentivised in a manner that fuels growth. "Both the countries are corrupt but these are the reasons why China has grown much after than India," he said.

Velamuri is of the view that China's strengths are petering out and weaknesses are beginning to appear. "China will have to address the issue of democracy at some point in time in the future," he said. Also, the ageing population is blunting the demographic dividend. The single child policy has meant that the country has 400 million less children. Labour shortage is already fuelling hike in labour costs, he added.

India is in a better shape now to reap the advantage as its demographic dividend is intact and the quality of higher education is far better than in China. Also, some private sector innovations in healthcare in select areas such as ophthalmology have ensured that India is far ahead of China.

"India has to learn from China and invest in human capital for generating and sustaining higher rate of economic growth," Velamuri said.

How the Munjals built a large business from scratch