New entrants apart, the aviation industry was saddled with high interest cost in 2014, which stretched the bottom lines further. 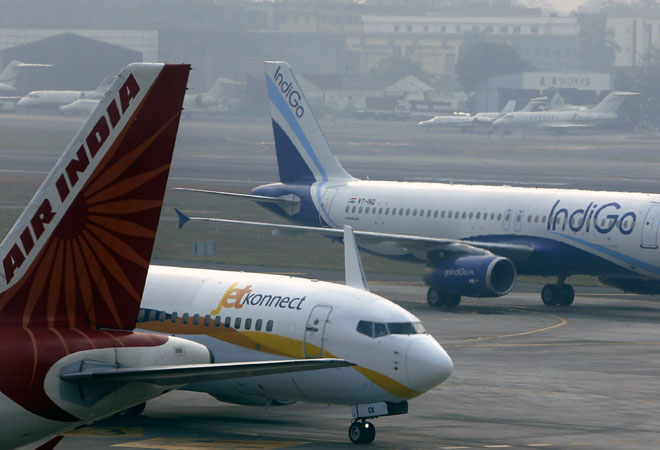 But these new entrants apart, the aviation industry was saddled with high interest cost in 2014, which stretched the bottom lines further, with high fuel cost adding to its woes for the bulk of the year save from mid-November when the global crude prices started to plummet.

FULL COVERAGE:All that made news in 2014

As a result, growth did not translate into higher profits for most carriers.

Between January and October, the latest month for which data is available, state-run Air India and private airlines ferried 55 million passengers, which was a healthy growth of 8.61 per cent over the 50 million in the like period of the previous year.

Yet, as per industry estimates, the carriers are expected to log a collective loss of more than $2 billion in the current calendar year. The passenger load factor, which is a key indicator of operational efficiency, varied between a low of 63.3 per cent and a high of 85.9 per cent.

"We are trying to review the policies to make it easy for the sector. We have a draft policy and we are considering a couple of reforms to help the industry. But there is much to do and we in the government know it," Civil Aviation Minister Ashok Gajapati Raju Pusapati told IANS.

But experts said mere talk will not help. "Good days 'Acchhe Din" appear far away. The Indian aviation industry is in ICU. It needs an urgent shock therapy," said Amber Dubey, partner and India head of aerospace and defence at global consultancy KPMG.

"Indian aviation has survived on hope for a very long time. It's time for the government, given its huge mandate, to finally do some long term corrections, a la the telecom revolution," Dubey told IANS.

The year started with the sector's regulatory regime hitting an unexpected air pocket - the US Federal Aviation Administration (FAA) downgraded the industry on grounds of safety. But there is hope now that the downgrade could be lifted soon.

SNAPSHOT:Why the Indian economy pinned hopes on PM Modi in 2014

Yet, this impacted the operations of Indian carriers like Air India and Jet Airways which fly directly to the US, as their aircraft had to undergo additional safety checks and stringent scrutiny before entering American airspace.

In other areas of reform, the previous government's plan to put six airports - those at Chennai, Kolkata, Ahmedabad, Lucknow, Jaipur and Guwahati - for privatisation was virtually scrapped, with the Narendra Modi government showing caution against the move.

In place of privatisation, the government plans to build or convert already available facilities into low-cost airports at 50 locations. The government also approved six applications for new airlines. But the applicants could not start operations for a variety of reasons.

Apart from regulations and policies, the industry focussed on return to what is called the back-to-basics, with Jet Airways merging its budget arm JetLite to became a full service carrier. Some others had to consolidate their operations due to financial strain.

SpiceJet, for example, had to reduce its fleet size to 26 aircraft from 35 earlier this year. The airline is also facing one of its worst crisis ever, and has placed plans before the civil aviation ministry for revival.

After eight years of talks, flag carrier Air India finally joined Star Alliance, the largest pact among carriers in the world, to giving its 60 million passengers who fly from the world's fifth largest aviation market better access to global connectivity, prices and deals.

The Indian aviation market also stunned the world when its budget carrier IndiGo placed an order for a staggering 250 Airbus aircraft.

As one looks to the next year, Vistara is set to take wings soon to become the 8th scheduled carrier in the Indian skies and the third to offer full-service carrier.

Along with AirAsia and AirCosta, the new carrier is expected to give the IndiGo, Air India, SpiceJet, Jet Airways and GoAir, a run for their money, experts said, adding: With fuel costs unlikely to move up soon, passengers can expect some good deals.

Robin Williams' death most searched in 2014