Total Dhamaal Box Office: The Ajay Devgn-Madhuri Dixit-Anil Kapoor is clashing with Gully Boy but that it not likely to impact its collections. 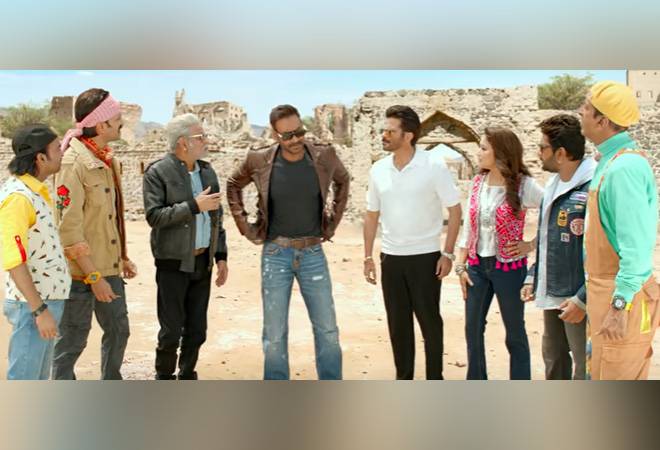 Total Dhamaal, the latest instalment in the Dhamaal series featuring some of the biggest names of the Hindi film industry has been released today. The cast of the Dhamaal series - Ajay Devgn, Arshad Warsi, Javed Jaffrey, Riteish Deshmukh - will reprise their characters and will be joined by superstars Madhuri Dixit and Anil Kapoor. While Total Dhamaal will clash with Ranveer Singh-Alia Bhatt's Gully Boy at the box office, its collections is unlikely to be affected.

While content-driven films like Uri: The Surgical Strike, Manikarnika: The Queen of Jhansi and Gully Boy seem to be the flavour of the season, Total Dhamaal is expected to sail through it all smoothly. So what is working in the favour of Total Dhamaal?

To begin with, Total Dhamaal is bringing back the golden couple of Madhuri Dixit and Anil Kapoor back on the screen after almost 20 years. The couple that gave some of the most memorable movies of the Indian film industries including Beta, Tezaa, Pukar, Ram Lakhan, Parinda is likely to recreate their magic on screen in Total Dhamaal. "We've teamed up in so many movies that we could tell each other's responses on camera without any discussion. I am very comfortable working with Madhuri. The last time we came together in a film was for Rajkumar Santoshi's Lajja in 2001 and now she is back, looking just as beautiful as she did back then," said Anil Kapoor, as per agency reports.

Even though good content sells, masala movies are still to be reckoned with. Additionally, as seen from such comedy series of movies, they usually tend to do well. The third instalment of the series, Dhamaal will bring in the fans of the original movie.

Moreover, when films most definitely are required to be promoted well, Total Dhamaal seems to have done a great job.

Factoring in all the points, Total Dhamaal is likely to open big. The Ajay Devgn-starrer is expected to make around Rs 12-13 crore on its opening day.

With its mixed reviews and Gully Boy's raving reviews, it is yet to be seen which film will last longer at the box office.