There is widespread anticipation for the first Budget, to be presented by Finance Minister Arun Jaitley on Thursday, as the BJP will have to balance steps aimed at meeting the expectations of people who voted it to power with some tough decisions to boost the economy. 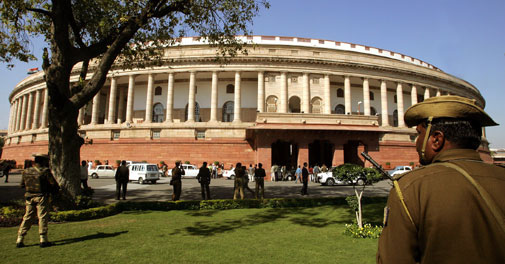 A crucial month-long session of Parliament that will see the NDA government present its first Union Budget begins on Monday against the backdrop of a raging spat between the ruling Bharatiya Janata Party (BJP) and Congress over the latter's claim to the title of Leader of the Opposition in the Lok Sabha.

With the Opposition parties planning to take the government to task over its failure to control rising prices, the BJP has reached out to them to ensure that the session proceeds smoothly.

Parliamentary Affairs Minister M. Venkaiah Naidu has convened a meeting of leaders of political parties in the Lok Sabha and Rajya Sabha on Monday morning, saying the government "wants to take everyone along". He said the government was not averse to discussing any issue in Parliament as long as it was approved by the chair.

The "issues" are quite a few in number.

The Opposition plans to attack the new NDA government on issues like widespread violence against women, allegations of rape against Union minister Nihal Chand Meghwal and the government's decision to reject the candidature of former solicitor general Gopal Subramaniam for the post of Supreme Court judge.

There is widespread anticipation for the first Budget, to be presented by Finance Minister Arun Jaitley on Thursday, as the BJP will have to balance steps aimed at meeting the expectations of people who voted it to power with some tough decisions needed to boost economic activity and investments.

Meanwhile, there are indications that the Congress could move court if it is denied the title of the Leader of the Opposition.

"We will explore all options," Congress spokesperson Randeep Surjewala said.

The second-biggest party in Parliament, the Congress has 44 seats in Parliament, 10 less than the number required to qualify as Leader of the Opposition.

Though Congress sources said the party was considering writing to the Speaker on the issue "with an eye on future options", Surjewala said the final decision lies with party chief Sonia Gandhi and vice-president Rahul Gandhi.