The AAP leader said that the budget neither favours the poor and middle class nor does it favour the corporate sector and there was no difference between the NDA and the UPA. 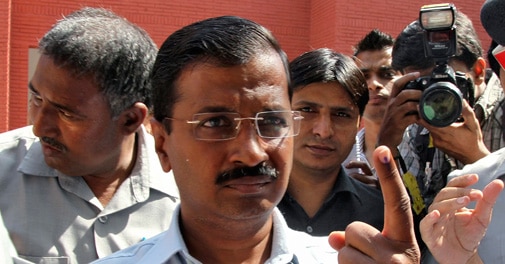 The Aam Aadmi Party (AAP) on Thursday termed the Union budget as a "dud", saying it has nothing to offer to any section of the society and has missed out on important issues like corruption, inflation and looming drought.

"People had high expectations from the budget, but it turned out to be dud. The budget was a last ray of hope. There are no steps to deal with corruption, inflation and no initiatives have been taken to tackle with the situation when there is a threat of drought looming over because of bad monsoon," party's National Convenor Arvind Kejriwal told reporters here.

The AAP leader said that the budget neither favours the poor and middle class nor does it favour the corporate sector and there was no difference between the NDA and the UPA.

"If you closed your eyes and heard (Arun) Jaitley properly, you would have thought it was Chidambaram speaking," Kejriwal said.

He said that no steps have been announced to curb down corruption, which is a main reason behind inflation and many sectors like health and education have been neglected in the budget.

"There is nothing in the budget for sectors like health and education. The government has not spoken on how to improve the employment opportunities," the former Delhi Chief Minister said.

In the budget Rs 200 crore have been earmarked for power reforms and Rs 500 crore for water reforms in the national capital. In addition, to solve the long term water supply issues to the capital region, construction of long pending Renuka Dam would be taken up on priority for which Rs 50 crore have been allocated.

To this Kejriwal said, "What kind of reforms will the government bring in Rs 200 crore. Instead it should give people subsidy on electricity and make water free the way we had done when AAP was in power."

He also took a swipe at Prime Minister Narendra Modi for the railway budget. "Instead of increasing seats, punctuality, Modi has given priority to high speed train between Ahmedabad and Mumbai. The whole focus was on this Rs 60,000 crore project," Kejriwal said. #budgetbt Tweets

A look at first Budgets of new governments in India