Budget aims to create more productive assets under NREGA. Will it sustain?

Jaitley also announced a plan to finance five lakh landless farmers through NABARD. Experts hope it should not result in leakage and corruption as in the case with NREGA. 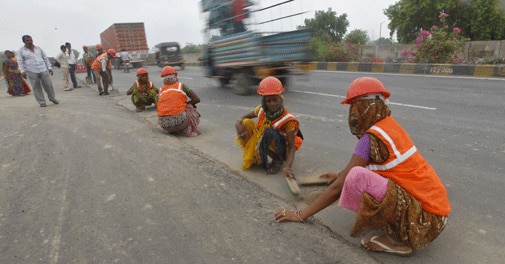 Finance Minister Arun Jaitley, while presenting the 2014/15 Budget, said that the government has maintained allocation for NREGA, which aims to provide at least 100 days of guaranteed wage employment in a financial year to every rural household. Jaitley has also emphasised on a major aspect of the guidelines provided during the initiation of the NREGA scheme.

Social activist Nikhil Dey says the budget has not been presented with a clear understanding of where NREGA stands today. "This year Rs 34,000 crore has been allocated as opposed to Rs 33,000 crore last year. While it does seem like an increase from last year, it's not. There's a budget deficit of about Rs 5,000 crore from last year, besides other costs that need to be cleared first. To sustain NREGA, the allocation should have been much more," adds Dey.

Jaitley also announced a plan to finance five lakh landless farmers through NABARD. Experts hope it should not result in leakage and corruption as in the case with NREGA.

On the "Aajeevika" programme, which is run by the Ministry of Rural Development, the finance minister talked about concessional loans at four per cent interest rates for funding local entrepreneurship, which is a positive sign. T. Muralidharan, Managing Director, TMIe2E Academy, an entity of TMI Group and an NSDC-funded company, says: "Today, Aajeevika is entirely a job-oriented programme. Does this mean changes in the programme? What will be the role of the skill ministry vis-à-vis the Aajeevika programme, however, is not quite clear."

There were certain new schemes for rural, minorities and tribal welfare announced in the budget. Besides the welfare of SCs and STs, this time another scheme, "Van Bandhu Kalyan Yojana" with an initial allocation of Rs 100 crore has been launched for the welfare of tribals.
Schemes such as "Swatchh Bharat Abhiyan" show a lot of promise as the government intends to provide sanitation facilities to every household by 2019. But what remains to be seen is how effectively it is implemented. The "Deen Dayal Upadhyaya Gram Jyoti Yojana", with an allocation of Rs 500 crore, will be launched to augment power supply to rural areas. #budgetbt Tweets

Govt initiatives will give more space for telecom players