Senior airline, MRO (Maintenance, Repairs and Overhaul) and other aviation industry officials made their case on these and other issues at a pre-budget meeting with Civil Aviation Secretary Ashok Lavasa. 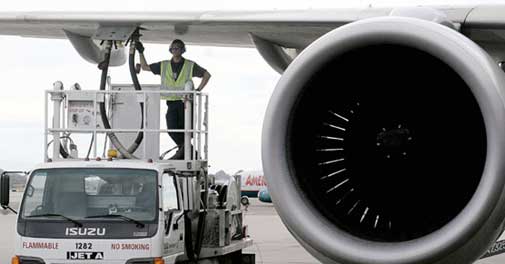 The aviation industry has asked the government to slash taxes on jet fuel, exempt aircraft engines from customs duty and rationalise taxation of MROs, as the BJP-led dispensation prepared for the general budget for 2014-15.

Senior airline, MRO (Maintenance, Repairs and Overhaul) and other aviation industry officials made their case on these and other issues at a pre-budget meeting with Civil Aviation Secretary Ashok Lavasa in the national capital, industry sources said. A similar meeting was convened by DGCA chief Prabhat Kumar on Monday.

The meetings are apparently in preparation for the Civil Aviation Ministry's briefing for Prime Minister Narendra Modi in the next few days.

Among the major demands was including aviation turbine fuel (ATF) in the 'declared goods' category so that sales tax on it comes down to about 4 per cent from the prevailing rates ranging from 28 to 35 per cent across the country, though some states like Chhattisgarh, Jharkhand and West Bengal impose only four per cent.

Airline officials present at Tuesday's meeting said that while ATF was supplied to small aircraft like Bombardier's Q-400s or turboprop ATRs as 'declared good' and charged around 5 per cent tax, larger aircraft weiging over 40,000 kg were levied up to 35 per cent sales tax.

Jet fuel constitutes about 40-45 per cent of the total cost of an airline.

The airlines also sought exemption of aircraft engines from customs duty, the officials said, adding that the exemption which was withdrawn in 2012 should be reinstated.

The government should either put ATF in the 'declared goods' category or reduce excise duty on it from 8-10 per cent to zero, Aeronautical Society of India's council member, Debashish Saha, who was part of industry delegations, suggested.

Exporters body asks Jaitley to roll back MAT from SEZs