Budget 2014: Five ways the govt can bring a smile on taxpayer's face

The Acchhe Din Lanewali Sarkar must be aiming at bringing out some big-ticket changes in this Budget that would bring a feel-good feeling to industry without disturbing the deficit calculations of the finance minister. 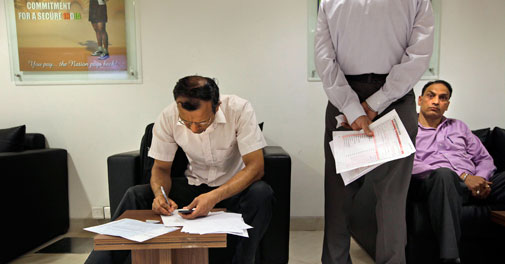 Waman Parkhi, Partner-Indirect tax, KPMG in India
The Acchhe Din Lanewali Sarkar must be aiming at bringing out some big-ticket changes in this Budget that would bring a feel-good feeling to industry without disturbing the deficit calculations of the finance minister. This article is a humble attempt to convey to North Block mandarins some simple ideas which may cost nothing but have a potential to alleviate pain of the assessees.

While Advanced Pricing Arrangements (APA) are working well for Transfer Pricing (TP) on international transaction on Direct taxes side, its counterpart in Customs is in deep mire with cases pending even for five to seven years in the Special Valuation Branches (SVBs) of customs houses and crores of rupees stuck in duty deposits with Customs. As SVBs almost wholly deal with subsidiaries of foreign companies, any efforts to bring in efficiency in this Customs Transfer Pricing will bring cheers to foreign investors. An APA that determines customs prices for five years and extendable by another five years (just like APA on TP side) will bring certainty - till now illusive - to Customs valuations.

If the government really wants to end tax terrorism, as reported in the media, making available Advance Ruling (AR) to even Indian companies (today only Indian public limited companies are eligible) and that too for even ongoing transactions (today only proposed activity is covered), which are not a subject matter of litigation, would provide a major relief. Of course, we would then need many more AR benches staffed with enough members to shell out a ruling in 90 days. This would dramatically decrease litigation and avoid wastage of resources. The fear that the field staff will then become redundant is unfounded as they would now have more time to go after delinquent assessees, rather than issuing unfruitful show-cause notices.

>> Cenvat credit on all expenses charged to P&L account -

Three years back the government made major amendments in the definition of input and input services, thus upsetting the apple cart that had almost stabilised over a long period of 25 years since 1986 when MODVAT was introduced first. This, by bringing in more disputes, only generated business for consultants. The need of the hour is to look towards the Goods and Services Tax (GST) when almost all expenses charged to the Profit and Loss (P&L) account would be covered under the set-off regime. Some may argue that excise is a single point tax and thus does not capture value addition in the supply chain after goods leave the factory and unbridled credit (like allowing set off on all expenses) will jeopardize government revenues. The answer to this is to allow say 90 per cent of such credit so that government revenues do not get a beating. This simple measure can reduce the litigation substantially.

All Value Added Tax (VAT) schemes around the world allow refund of accumulated credits. All state governments in India also give such refunds, but not the central government. This is especially when we have an inverted duty structure when bulk of the raw material is imported and is charged with a Countervailing Duty (CVD) of 12 per cent and Special Additional Duty (SAD) of four per cent, accumulating credit of almost Rs 17 on every Rs 100 purchase. The output duty, however, is only 12.36 per cent, thus requiring value addition of 50 per cent or more if other credits on services and capital goods are accounted for. No one, except an exporter, has an avenue to claim the accumulated credit back, which thus remains a cost in the supply chain. A refund mechanism or a tradable scrip in lieu of refund is, what would alleviate the pain of the industry. This suggestion, of course, would have an adverse impact on the revenues of the government.

The earlier government reversed the industry-friendly Supreme Court judgement in Vodafone case by making a retrospective amendment in the Income Tax Act. However, the same government did not apply a similar yardstick for the FIAT judgement under excise law that was revenue-friendly. It, nevertheless, brought in a very good circular that ring-fenced unwanted widespread impact of the judgement. The need today, in the interest of industry, is to rewrite Section 4 of the Central Excise Act and the Valuation Rules considering learnings from disputes and litigation over last 14 years.

The biggest paradigm shift under central indirect taxes occurred not in 1991 but way back in 1969, when in one swift action the government removed 'Physical Control' (i.e. each removal of goods from factory to be made under the excise officer's supervision) under excise and introduced 'Self Removal Procedure' (i.e. removal of goods as per manufacturer's wish), amidst fears of large-scale evasion. These fears later turned out to be false. A liberal and simple tax regime, it is proved often, always results in better revenues for the government due to lesser pain to assessees and the 1969 example should serve as a lighthouse even after 45 years.

(Dr. Waman Parkhi is Partner-Indirect tax with KPMG in India and can be reached at wparkhi@kpmg.com)

Govt should extend incentive to boost R&D activity in India