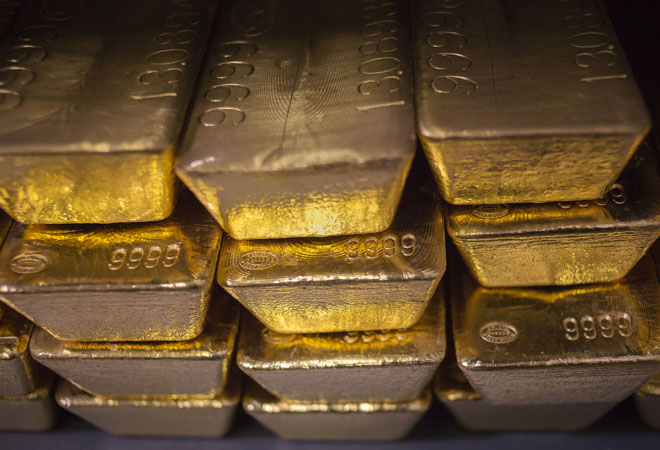 India buys 800-1,000 tonnes of gold a year, but the decision to keep the import duty intact may raise prices that were edging down on expectations of a cut. Smuggling could rise, too.

The government will introduce gold deposit accounts to utilise the 20,000 tonne available within the country and launch a sovereign gold bond, the finance minister said on Saturday, but kept the import duty at the record 10 per cent in a setback for jewellers.

"Though stocks of gold in India are estimated to be over 20,000 tonnes, mostly this gold is neither traded nor monetized," Jaitley said in his speech unveiling the Budget for the fiscal year starting April 1.

India buys 800-1,000 tonnes of gold a year, but the decision to keep the import duty intact may raise prices that were edging down on expectations of a cut. Smuggling could rise, too.

"This is very disappointing," said Prithviraj Kothari, executive director of the India Bullion and Jewellers' Association. "Higher import duty is nothing but a golden opportunity for smugglers to grow and expand their business."

Kothari said smuggling could rise 20-30 per cent in 2015 from the estimated 175 tonnes last year.

Salina Kishore, a Mumbai housewife who delayed purchases for her daughter's wedding, says she will now buy less.

"I'll have to buy whatever is the price," Kishore said. "But now I'll buy less and sell my old jewellery to purchase new designs."

Jaitley said gold depositors will earn interest on their gold account, while jewellers can obtain loans on it. Banks and other dealers will be able to monetize the gold.

The sovereign gold bond will be an alternative to purchasing the metal and will carry a fixed rate of interest. Holders will be able to redeem them in cash on the face value of gold.

He did not set a timeline for the new measures.

Gold deposit schemes already offered by Indian banks have not been popular, as many women traditionally prefer to hold their gold in ornament form received as gifts during weddings or on other occasions.

"This new scheme is a balanced one and would be a success," predicted Rajesh Khosla, managing director of MMTC-PAMP, the biggest gold refiner in India. "It would not happen overnight, government will take 3-6 months to come out with all the details of the scheme."

(Additional reporting by A. Ananthalakshmi in Singapore)

Budget takes steps to ease of doing business in India