So far, year 2016 has not been very lucky for the Indian equity markets and BSE Sensex is already down nearly 9 per cent. 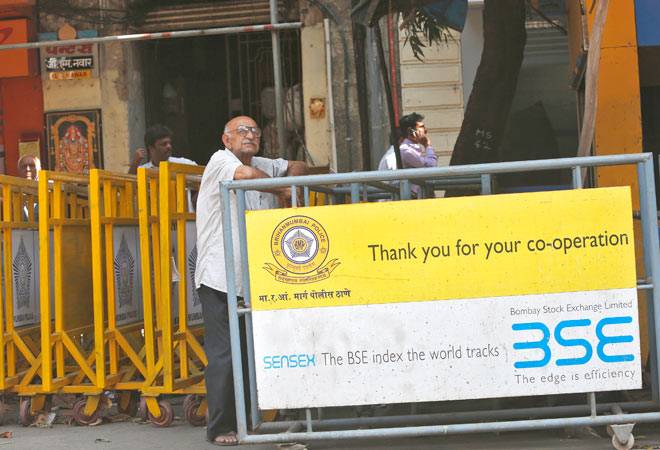 So far, year 2016 has not been very lucky for the Indian equity markets and BSE Sensex is already down nearly 9 per cent. (Photo: Reuters)

So far, year 2016 has not been very lucky for the Indian equity markets and BSE Sensex is already down nearly 9 per cent. The devaluation of the Chinese currency in the beginning of the year and the US Federal Reserve hiking interest rates for first time in 9 years, have made investors across the globe nervous. According to market grapevine, investors have pulled out around $40 billion from equity funds in the last two months of 2016. In India too, foreign institutional investors (FIIs) pulled out $ 2.3 billion from Indian equities till February 22, 2016.

"Interestingly none of the problems which investors cite for the recent decline of the markets are new," says R Venkataraman, managing director at IIFL Group.

Whatever the reason be, Indian markets have reached a stage where the Sensex and Nifty are back to May 2014 levels.

Indian markets are globally integrated and whatever happens in the world will definitely impact India and Indian markets. But forthcoming Budget would be one of the factors that would decide future movement of the Indian market. in the upcoming budget, market would look out for indication from the government on spending and reforms to attract investment and to boost India's GDP.

With poor monsoon for two consecutive years the rural sector isn't spending. And the private sector is also on the back-foot due to the leveraged bets corporates had taken in 2008, in sectors like power, roads and infrastructure.

In this scenario government is the only entity that will be able to spend money due to the huge fall in oil prices. In short government spending will determine which sector and companies will do well.

Markets will also keep a close eye on the reform process of the government and the passage of reform bills. Considering the headwinds surrounding the economy, budget will have to keep in check fiscal prudence while increasing demand to re-start the engine of growth. In short, it will have to make the elephant run in such a manner that it reaches its destination without putting pressure on the government kitty.

Government spending a key to fuel the growth engine

So what should government do?

"Clearly focus has to remain on increasing demand and growth. Growth will be driven by investments," says Nilesh Shah, CEO at Kotak AMC.

Shah feels, "It will require legislative changes as well as administrative reforms. Investment requires public push as private sector is leveraged. Budget should provide incentives for financial savings and lay a road map for fiscal consolidation to lower (interest) rates. Budget should raise resources through monetisation of government assets rather than raising taxes. It should focus on increasing financial savings, monetising government assets especially through strategic divestment and controlling subsidy along with increased public investment."

Agreeing with Shah, Vikaas Sachdeva, CEO at Edelweiss AMC, feels that for the market to get a fillip, it is necessary for the government to invest further in physical infrastructure; which includes aggressive growth targets towards building roads, railways, ports, electricity, energy, etc.

Government spending seems to be the key catalyst for the equity market, but Gautam Chhaochharia, Head of India Research at UBS, says: "Quality of spending is the key. While spending is important, the government should stick to its roadmap on fiscal consolidation. Any deviation from it will be bad for the market as stability and credibility are very important factors for investors."

He adds, "Besides equity investors, currency and macro- economic investors are investing in India and any loss of credibility will see them pulling out money from India."

"It would also be important to watch government allocation for the hikes in salary of government employees, after the implementation of the seventh pay commission." says Chhaochharia.

"Increasing taxes, disinvestment of assets and spectrum auction for funding the salaries will be shoddy spending."

Don't tax the retail sector but encourage them to invest

Meanwhile, the only positive in this doomsday scenario for the Indian equity market has been the continuous inflows of money from the Indian mutual funds.

While the Indian equity markets ended the year 2015 four per cent lower, the mutual fund industry saw a total inflow of over Rs 4 lakh crore in equity funds, up 27 per cent compared to the corresponding period in the last year.

"My biggest concern today for the Indian equity market is slowdown and outflow of money from mutual funds," said a mutual fund CIO on condition of anonymity.

He also feels that with lack of domestic triggers and global concerns, it will be the Union Budget, which will be the immediate trigger for the Indian market.

Despite a fall in equity market, the mutual funds saw a sustained flow of money into the mutual fund industry. In January 2016, the industry asset under management (AUM) in equity funds declined by 5 per cent, but the MF equity schemes continued to see an inflow of Rs 2,914 crore.

Sachdeva of Edelweiss AMC, says, "For giving mutual funds a further fillip,  I hope the current budget will garner long-term money into equity schemes by bringing mutual fund schemes into the notified list of securities under Section 54EC as well as treating fixed income ETFs as listed debt. Also expecting clarity on who pays the service tax on MF distribution."

"I believe this would be a catalyst for channelizing investor interest into tangible flows, for the government", he adds.

There are different triggers domestically and globally that would change the market from the levels as well as the foreign flows. Budget is one of the trigger points.

"Though the headline numbers are negative in terms of FII flows. Among the emerging market, India is definitely in a bright spot with FIIs still overweight on India," says Aashish Mishra, managing director (Head Securities Services), Citibank.

"If sentiment improves globally and towards emerging markets, India will be among the biggest beneficiary of foreign flows. However, on the domestic front we still have to wait for the outcome of the budget and see if it is a big-bang one that can overshadow global events." Mishra feels investors are looking for some tax clarification, fiscal deficit and quality of public spending. But other policy reforms like the implementation of GST, the drive of the government to lead investments in sectors like roads, power and railways and revival of corporate earnings will generate interest towards India.

Simplifying market access and tax rules will be closely watched. While foreign investors will look at a clarification on permanent establishment rule for fund managers to set up local offices. Investors will also look to clarifications on the reduced withholding tax on bonds of 5 per cent that lapses in June 2017. We could see it being extended or made permanent in this budget. Then there is also GAAR rules that they would like to get clarity on.

It is fairly clear that most people are looking towards India as a growth story, which will remain relatively unscathed in the global turmoil. Budget in that sense will be important if it can make the right noise in terms of increasing business confidence and further investments in the economy.

"In 2014, when Modi ascended as the Prime Minister of the country, people had become very optimistic. They believed he had a magic wand and that a knight in shining armour had arrived who will solve all India's problems. Two years later, the market seems to have concluded that Prime Minister Modi is not doing anything, he is not good enough and that we are doomed. Both the extremes are wrong and the truth is somewhere in between," says Venkataraman of IIFL. "My advice to investors is, buying at current Nifty level makes more sense than buying at 9,000. Second, only invest that amount of money, which you can afford to lock in, for 5-10 years without worrying."