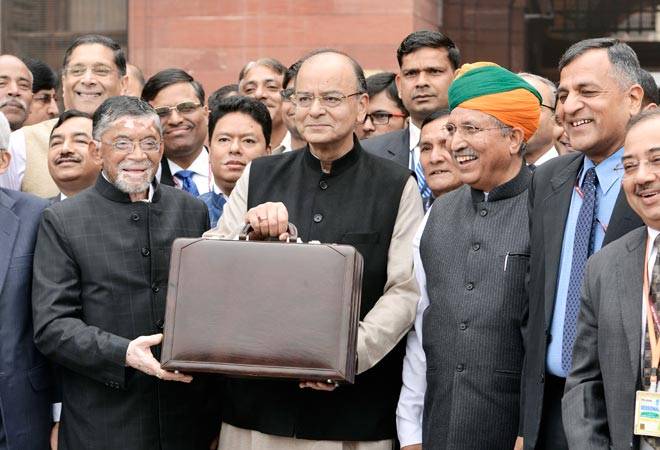 After the immense confusion over the delay of the Union Budget on Wednesdsay, Union Finance Minister Arun Jaitley presented the Budget as scheduled.

In a big relief to the middle class, Arun Jaitley in his Budget speech reduced the Income Tax rate for people coming under the bracket of annual income of Rs 2.5-5 lakh.

Jaitley said the demonetisation move will not impact the Indian economy. He also increased the allocation for welfare of women and children under various to Rs 1,84,632 crore.

This was for the first time that the Railway Budget was merged with the General Budget. In his fourth Budget Speech, Arun Jaitly announced that the focus of the Railways will be on passenger safety, capital works and cleanliness.

Here are live updates on the Union Budget 2017

Misleading. Full of jugglery of numbers and hollow words which mean nothing 4/4

A controversial #Budget2017 which is clueless, useless, baseless, missionless and actionless. Heartless 1/4

Tax payers still have restrictions on withdrawals. Remove all restrictions immediately. And where are the figures for #DeMonetisation? 3/4

India’s politics is yet to mature: FM @arunjaitley#Budget2017pic.twitter.com/GhsEM85flF

Any step to clean political funding will be supported by us

I thank FM for according infrastructure status to affordable housing; helping poor meet aspirations of owning a house. #BudgetForBetterIndia

This Budget will help small businesses to become competitive in the global market: PM @narendramodi#BudgetForBetterIndia

The commitment to eliminate corruption and black money is reflected in the Budget: PM @narendramodi#BudgetForBetterIndia

Special emphasis has been given on women empowerment in the Budget: PM @narendramodi#BudgetForBetterIndia

Elimination of unmanned level crossings on the BG network by 2020
#BudgetForBetterIndiapic.twitter.com/h6rVIHizI8

FM : My approach in preparing the #Budget2017 is to spend more on rural areas, infrastructure & poverty alleviation with fiscal prudence.

Demonetisation was a bold & decisive strike in a series of measures to arrive at a new normal of bigger, cleaner & real GDP:FM @arunjaitley

LIVE: Growth in a no. of emerging economies is expected to recover in 2017: FM @arunjaitley#Budget2017https://t.co/gY7YQo5nsn

FM @arunjaitley: We are moving from informal to formal economy & the Government is now seen as a trusted custodian of public money.

Union Budget 2017: Ahead of polls, govt stays away from price hike

Budget Electoral Funding Cap: Clean and cashless India, not yet!