Apart from farmers and the gareeb nagrik, it is the older demographic that stands to gain the most from the latest Budget. To begin with, tax exemption of interest income from bank deposits has been raised to Rs 50,000 from the current Rs 10,000. 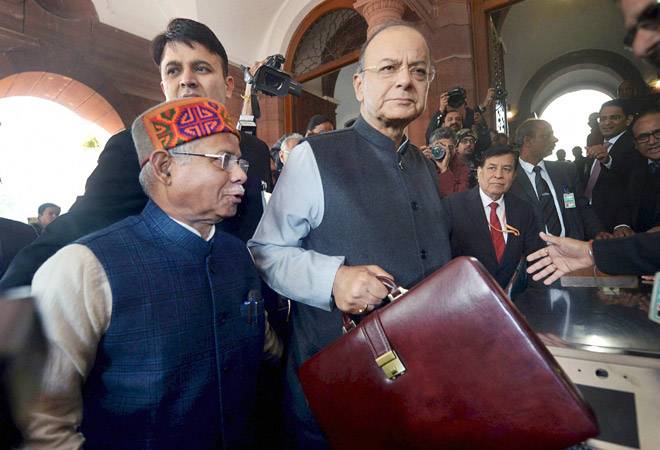 So after a month of speculation, wishing and forecasting Budget 2018 has finally been presented and Finance Minister Arun Jaitley is currently in the midst of the post-Budget press conference. In case you missed his speech, here are the key takeaways:

While the personal income tax structure remains the same-that is no new tax slab and no higher exemption limits-as a as a small concession, Jaitley has announced a standard deduction of Rs 40,000 for salaried taxpayers. This will be in lieu of the existing transport allowance and medical expense reimbursement. However, other medical reimbursements in case of hospitalisation will continue.

According to him, the existing allowances amount to Rs 30,000 so the actual tax benefit here on would be Rs 10,000 more for each taxpayer. This move is expected to benefit 2.5 crore people-25-30% of the total taxpayer base--and reduce paperwork along the way. The revenue cost of this concession is pegged at Rs 8,000 crore.

But if he is putting money in your wallets, his other hand is also taking cash away. The education cess levied on the tax you pay (also applicable on corporation tax) has gone up by 1%. The new 4% Health and Education Cess is expected to help the government collect an additional amount of Rs 11,000 crore.

Apart from farmers and the gareeb nagrik, it is the older demographic that stands to gain the most from the latest Budget. To begin with, tax exemption of interest income from bank deposits has been raised to Rs 50,000 from the current Rs 10,000. He has also proposed to raise the deduction under health insurance premium under Section 80D of the Income Tax Act to Rs 50,000 (from Rs 30,000 currently). In case of senior citizens with critical illnesses the deduction will be Rs 1 lakh. Moreover, Fixed Deposit/Post office interest to be exempt till Rs 50,000. These concessions are expected to give senior citizens extra tax benefit of Rs 4,000 crore.

In addition to tax concessions, the government has proposed to extend the Pradhan Mantri Vaya Vandana Yojana up to March 2020 under which an assured return of 8% is given by Life Insurance Corporation of India (LIC). The existing limit on investment of Rs 7.5 lakh per senior citizen under this scheme is also being enhanced to Rs 15 lakh.

India Inc, which had been hoping for an across the board cut in corporate tax rate to 25%, has also been left disappointed. Jaitley has announced that only companies with a turnover of up to Rs 250 crore will now be taxed at 25%. According to him, this move will benefit 99% of companies and the revenue foregone is pegged at Rs 7,000 crore in 2018-19. After this, out of about 7 lakh companies filing returns, only about 7,000 companies will remain in 30% tax slab.

The other bit of bad news is that the FM proposed to tax long term capital gains exceeding Rs 1 lakh on sale of equity shares/units of Equity oriented Fund at 10%, without allowing any indexation benefit. To justify his move, he pointed out that the total amount of exempted capital gains had surged to nearly Rs 360,000 crore, as per returns filed for assessment year 2017-18, and that the return on equity was attractive even without exemptions. A major part of this gain has reportedly accrued to corporates and LLPs. So while retail investors will also be hurt by this move, the impact will be most felt by corporates.

However, existing investors will be exempted from capital gains tax up to January 31, 2018. All gains made thereafter this cut-off date will be taxed. This move could earn the government Rs 20,000 crore in revenue in the first year. The revenues in subsequent years may be more.

The Union Budget 2018 seems to have been the shot in arm it was predicted to be for the slowing agricultural sector of India. Staying true to government's electoral promise of doubling farmers' income by 2022, Jaitley kept the minimum support price (MSP) of kharif crops and all rabi crops at one and a half times the production cost of the crops. Currently, most of the rabi crops get that benefit.

In addition, an Agri-Market Infrastructure Fund of Rs 2000 crore will be set up for developing agricultural markets. Jaitley further allotted Rs 500 crore under Operation Greens-to be launched on the lines of 'Operation Flood'-to address price volatility of perishable commodities and to promote Farmer Producers Organizations (FPOs), agri-logistics, processing facilities and more.

As per provisions of Budget 2018, government will encourage organic farming by FPOs and Village Producers Organizations (VPOs) in large clusters, preferably of 1000 hectares each. Women Self Help Groups will also be encouraged to take up organic agriculture in clusters under National Rural Livelihood Programme. Also, a sum of Rs 200 crore have been allocated to support organized cultivation of highly specialized medicinal and aromatic plants and aid small and cottage industries that manufacture perfumes, essential oils and other associated products.

Significantly, calling bamboo "green gold", the finance minister announced the launch of a restructured National Bamboo Mission with an allocation of Rs 1,290 crore. The government will also set up two new funds for the fisheries sector and animal husbandry sector with a total corpus of Rs 10,000 crore.

Explaining that India's agri-exports potential is as high as $100 billion against current exports of $30 billion, Jaitley wants export of agri-commodities to be liberalized. "I also propose to set up state-of-the-art testing facilities in all the forty two Mega Food Parks," he added.

Lastly, the Budget not only proposed to raise institutional credit for agriculture to Rs 11 lakh crore for 2018-19 (up from Rs 10 lakh in the current fiscal) but also addressed the issue of air pollution due to burning crop residue. The Finance Ministry said that a special scheme will be implemented to support the efforts of the governments of Haryana, Punjab, Uttar Pradesh and the NCT of Delhi to address air pollution and to subsidize machinery required for disposal of crop residue.

The icing on the cake is the announcement of 100% tax deduction for first five years to companies registered as farmer producer companies with a turnover of Rs 100 crore and above.

"From ease of doing business, our government has moved to ease of living for the poor and middle class," Jaitley said in his speech. But he actually meant only poor families, who have been extended a plethora of schemes and allocations. Take the new National Health Protection Scheme under which annual health coverage of up to Rs 5 lakh per family will be offered for secondary and tertiary care hospitalization. This is expected to benefit over 10 crore vulnerable and under-privileged families. "This will be the world's largest government funded health care programme," Prime Minister Narendra Modi said in his address soon after the Budget speech.

The government will also establish 1.5 lakh Health and Wellness Centres under the Ayushman Bharat programme to provide comprehensive health care-including for non-communicable diseases and maternal and child health services-free essential drugs and diagnostic services. The Budget has earmarked Rs 1200 crore for this flagship programme.

In line with the government's "Housing for All by 2022" promise, Jaitley announced that a dedicated Affordable Housing Fund will be set up, funded from priority sector lending shortfall and fully serviced bonds authorized by the government.

Also on the cards are free LPG connections to 8 crore poor women-up from the initial target of 5 crore beneficiaries-under the Ujjwala Scheme; two crore more toilets under Swachh Bharat mission, and a whopping Rs 16,000 crore allocation for the Saubhagya Yojana, under which four crore poor households are being provided with electricity connection free of charge.

The FM announced that Wi-Fi, CCTVs will be provided in every station and escalators will be provided in stations with more than 25,000 footfalls. In the coming year, there will be a focus on upgradation of signalling and use of fog safety devices. He added that 600 railway stations across the country have been picked for modernisation and 4,000 km of railway network is set to be commissioned for electrification.

According to him, the coming year will be dedicated to building world-class trains and a railway institute will be set up in Vadodara, where the workforce behind high speed railway projects would be trained. There will also be a special focus on the upliftment of suburban trains in Mumbai and Bengaluru.

"In order to further enhance accessibility of quality medical education and health care, we will be setting up 24 new Government Medical Colleges and Hospitals by upgrading existing district hospitals in the country. This would ensure that there is at least one medical college for every three parliamentary constituencies and at least one government medical college in each state," said Jaitley.

Significantly, by 2022, every block with more than 50% scheduled tribe population and at least 20,000 tribal people will have 'Ekalavya' school at par with Navodaya Vidyalas. Jaitley also announced a new scheme for revitalizing school infrastructure, with an allocation of Rs 1 lakh crore over four years. He added that an integrated BEd programme will be initiated for teachers, to improve the quality of teachers.

Custom duty on mobile phones increased from 15% to 20%. The duty applicable on some mobile phone parts and accessories has been hiked to 15% and that on certain parts of TVs to 15%. "To help the cashew processing industry, I propose to reduce customs duty on raw cashew from 5% to 2.5%," added Jaitley.

Significantly, Budget 2018 has levied a "social welfare surcharge" at 3-10% on imports in place of the Education Cess and Secondary and Higher Education Cess currently in place.