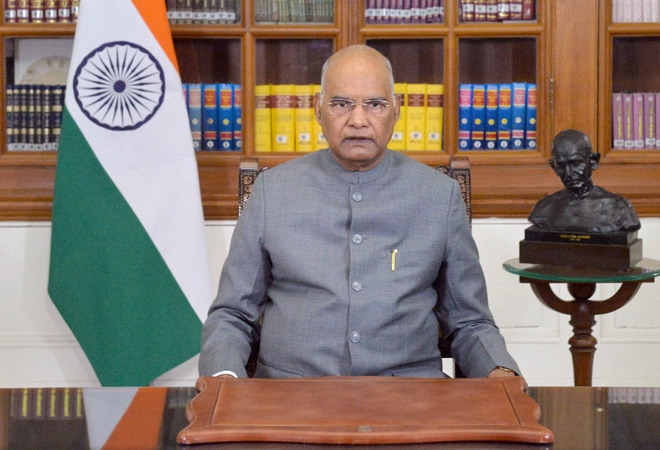 President Ram Nath Kovind addressed the Parliament on Friday, ahead of the beginning of the Budget 2021 session. The President highlighted the achievement of the government in a year fraught with loss of lives and livelihoods. President Kovind said that despite the negative impact of the coronavirus pandemic on the economy, India remains an attractive destination for global investors. He further spoke about India's vaccination drive and the strides made in the pharma sector. President Kovind also spoke about the Republic Day violence and said that the Constitution along with providing Freedom of Expression also teaches one to follow law and order seriously.

"The nation is recovering from the damage that the economy suffered while saving the life of every Indian during the coronavirus period. Even then India has emerged as an attractive destination for global investors," said the President. He said that for the first time, a production-linked incentive scheme of about Rs 1.5 lakh crore has been implemented in the country for 10 sectors related to manufacturing. "Its benefits have started showing in the manufacturing of many other goods including electronics," he said.

Speaking about farmers, President Kovind said that Rs 1.13 lakh crore have already been transferred directly to the accounts of small and marginal farmers under the PM-Kisan Samman Nidhi. He addressed the furore against the farm laws and said that the government aims to give new facilities and rights to the farmers and not take away anything from them. President Kovind also spoke about the clash during farmers' tractor rally during Republic Day and lamented the violent events. He said that the national flag was insulted on a day like the Republic Day. "The Constitution that provides us Freedom of Expression, is the same Constitution that teaches us that law and rules have to be followed seriously," he added.

The President also spoke of the vaccination drive in India. Speaking about the two vaccine candidates -- Serum Institute's Covishield and Bharat Biotech's Covaxin -- he said that India is currently conducting the world's largest vaccination drive. "We're also distributing vaccines to different countries and being praised for it," he added. President Kovind said that timely decisions by the government helped save lakhs of lives. "Today the number of new COVID cases is going down rapidly. The number of recoveries is very high," he said. He added that India has provided necessary medicines to more than 150 countries. India is also committed to ensuring the availability of vaccines on a global scale, said President Kovind.

President Kovind spoke of the Ayushman Bharat Yojana and said that it can be availed in any of the 24,000 hospitals across the nation. "The poor are getting medicines at very low costs at 7,000 centres across the country, under Pradhan Mantri Bhartiya Janaushadhi Pariyojana," he said.