Inside The Colossal Empire Of Gautam Adani

Half a dozen new ventures from the Adani Group are ready to unlock value in the near future. This, on top of the already zooming market cap of the group’s listed enterprises, would be like icing on the cake for shareholders and investors

Zomato, Nykaa, Paytm led the IPO boom in 2021, but failed. Can the tide turn?

The crackling 500: Here are India's most valuable listed companies

Competing in markets is tougher than the Olympics, says market maestro Ray Dalio

BT500: The pharma sector presents a study in contrast; here's why

As 5G networks roll out in India, what are the new areas of growth

Tata Power is evolving into a power solutions provider. What exactly does that mean?

IRCTC's post-pandemic growth is ongoing. Here's what is happening

BT 500: Here's why LIC is one of India's most valuable companies

BT 500: Is JLR holding the growth of Tata Motors back?

*Figures calculated by multiplying the total number of shares held by promoters as of September 30, 2022 and market price on November 24, 2022 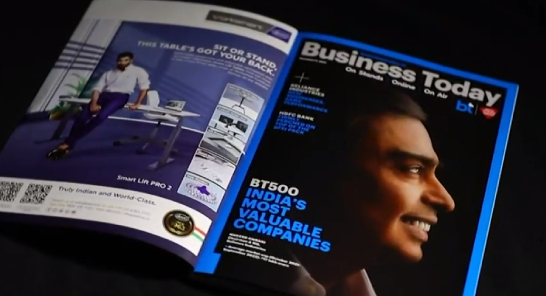 We began with a master sample of 4,271 listed and actively traded companies. We have used the BSE market capitalisation for all cases, except companies that are listed only on the NSE. Some 230 companies that were not traded on at least 20 per cent of the 249 total trading days in the October 2021-September 2022 period, were excluded from the list. Thereafter, we extracted the average (daily) market capitalisation of each company over the period under consideration and used it to rank the top 1,000 companies.

For a deeper perspective, we have also provided the average market capitalisation over the past two fiscals (FY22 and FY21), return on net worth (RONW) and return on capital employed (ROCE), in the tables. We have also ranked companies based on assets, profit after tax, total income and debt, and taken only consolidated numbers except in cases where companies don't report their consolidated results.

Data provider (ACE Equity) has not considered share of profit/loss of associates and joint ventures for calculating profit after tax wherever applicable.

Companies in the banking, financial services and insurance (BFSI) sector have not been ranked on these parameters as their method of capturing and measuring these metrics is markedly different. For most companies, the financial year ending is March 31. The exceptions have been mentioned in the footnotes below the tables. All data has been sourced from the ACE Equity database as on November 7, 2022.

A few companies have also changed their names in the past one year ended September 30. For instance, Ruchi Soya is now known as Patanjali Foods, Escorts has changed its name to Escorts Kubota, ABB Power to Hitachi Energy, Sterling and Wilson Solar to Sterling and Wilson Renewable Energy, Burger King India to Restaurant Brand Asia and Minda Industries to Uno Minda, among others.