In these uncertain times, the top legacy companies on the BT500 list have posted stellar numbers in the past year, and are perfectly placed to leverage the government's infrastructure push

In these uncertain times, the top legacy companies on the BT500 list have posted stellar numbers in the past year, and are perfectly placed to leverage the government's infrastructure push

Mind-boggling valuations. Much-awaited listings. Stocks getting pummelled. Anyone tracking the Indian stock markets will tell you that this has been the usual story for new-age companies that were listed over the past year or so. While the listing gave the start-ups’ existing investors a chance to sell their holdings and get high returns, the stock price crash thereafter left retail investors frustrated.

Amid all this, old-economy or legacy companies have provided the much-needed salve. While these firms have been around for years, the recent surge in investor interest has been because of factors like rising commodity prices, geopolitical uncertainty or their smart moves. Their revenue growth has been steady, and profitability has been on expected lines. And in these uncertain times, this predictable story has found favour with investors too. Those leading the surge include Hindalco Industries, Vedanta, Coal India and L&T, and most have improved their ranks on the BT500 list this year.

So what did these old-economy companies do right? As fears of a recession loom large over most big economies globally, businesses have been under pressure to reorient their models. Take the case of metals and mining major Vedanta, No. 42 on the BT500 list. According to CFO Ajay Goel, its continued focus on disciplined allocation of capital, effective strategic business planning, driving key capex/growth projects and ESG commitment has helped it create value for stakeholders. “Our return on capital employed has significantly improved from 11 per cent in FY20 to 30 per cent in FY22, while free cash flow has increased three-fold. We were also the highest dividend-paying company last fiscal in India,” he says. All this has been helped by its record production volumes for aluminium and zinc across all markets.

In the case of metals major Hindalco (No. 49 on the BT500 list), Managing Director Satish Pai says the strategy of vertical integration coupled with operational efficiency and cost optimisation has made the difference. “Our overseas subsidiary Novelis’s focus on organic growth, enriched product mix and operational excellence has also worked well. Besides, our focus on deleveraging and creating a more sustainable business model has helped strengthen our balance sheet,” he explains. In the process, the company’s return on capital employed has improved significantly from 8.8 per cent in FY20 to 16.61 per cent in FY22. “Our consolidated net debt to Ebitda was at 3.52x post the Aleris acquisition (completed in April 2020 for $2.8 billion) and it is currently at a strong 1.47x (as on September 30, 2022). This gives us enough headroom to fuel the next phase of organic growth.” 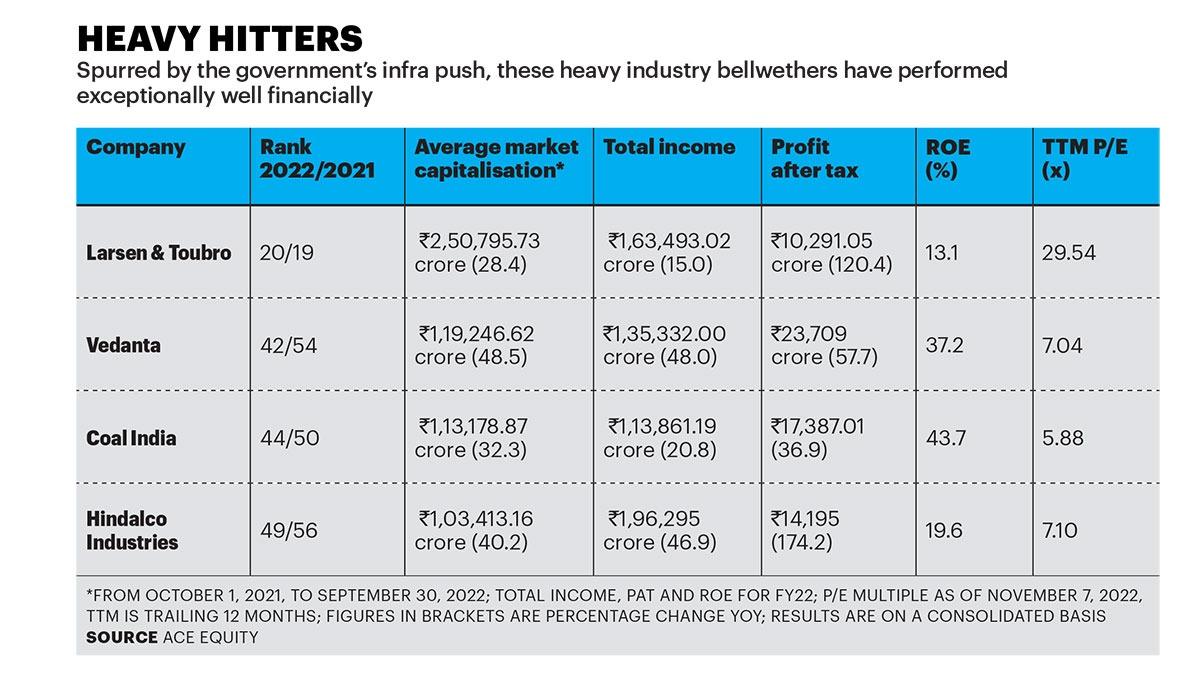 What has also helped is the spurt in commodity prices globally. According to Rakesh Arora, Managing Partner of investor relations firm Go India Advisors, both Vedanta and Hindalco utilised this upturn in prices to reduce their debt. “None of the companies have announced very large capex and are, therefore, being conservative with their balance sheets. Clearly, the market has rewarded this improvement in balance sheet,” says Arora. Both firms saw a surge in their average market capitalisations for the BT study period (October 2021-September 2022).

According to Vipul Prasad, Founder & CEO of Magadh Capital Advisors, Hindalco has done well to reduce earnings volatility by expanding its footprint in the fast-growing downstream businesses and widening its geographical mix. “Vedanta has continued to lighten the balance sheet, capture large portions of the material value chain, and diversify its product mix. More focus on a reduction in carbon footprint, more cost structure improvement and scaling up are other factors that can aid valuation multiples for the two stocks,” he says.

Another company that has done well is public sector major Coal India, which is at No. 44 on the BT500 list. A key priority for it has been to increase productivity through cost-cutting. From FY14 to FY22, Coal India has been curtailing its workforce at a CAGR of 4 per cent, says Aditya Welekar, Senior Research Analyst at Axis Securities. “Between FY19 and FY22, it has achieved a 13 per cent reduction in its employee base, which now stands at 254,000 employees,” he says. But there are more reasons why Coal India has done well. Welekar points to the closure of underground mines as one more area, where at the end of the last fiscal, they accounted for 38 per cent of the workforce but contributed only 4 per cent to total production. Another positive has been the clubbing of e-auctions, he says. Five independent e-auctions have been combined into one for the sake of simplicity. “This has led to higher participation from the non-regulated sectors… and clubbing these [e-auctions] means a uniform market-discovered price for the same grade of coal,” he says. The Russia-Ukraine conflict also led to higher natural gas prices and “drove a shift towards coal-fired power generation in Europe, leading to higher demand for coal and [higher] prices as well.” Prasad adds that it is now being increasingly accepted that coal will remain the mainstay for India’s power requirement for another 25-30 years. “With its utility-like characteristics, strong cash flows, robust volume-led top line growth and a solid balance sheet, Coal India looks attractive.”

Coming to infrastructure, L&T (No. 20 on the BT500 list) is expected to gain substantially going ahead. “It has tried to become asset-light, and the approach is to not use the balance sheet for asset ownership. Now, we see the defence theme picking up and that will add a lot of tailwinds to L&T. Some of the best years of L&T might be just ahead of us,” says Go India’s Arora. Besides, L&T also depends on capex in oil and gas and hydrocarbons for the growth of its order book. “Currently, high energy prices have brought back interest in carbon energy sources and capex is picking up. This augurs well for L&T.” Another positive is the improvement in the balance sheets of India’s largest companies and banks coupled with rising capacity utilisation in the economy. “That indicates a sharp uptick in the engineering and construction business. L&T with its all-round capabilities—technical, logistical and financial—is the company that is best-placed in the sector to benefit from these industry trends,” says Magadh’s Prasad. 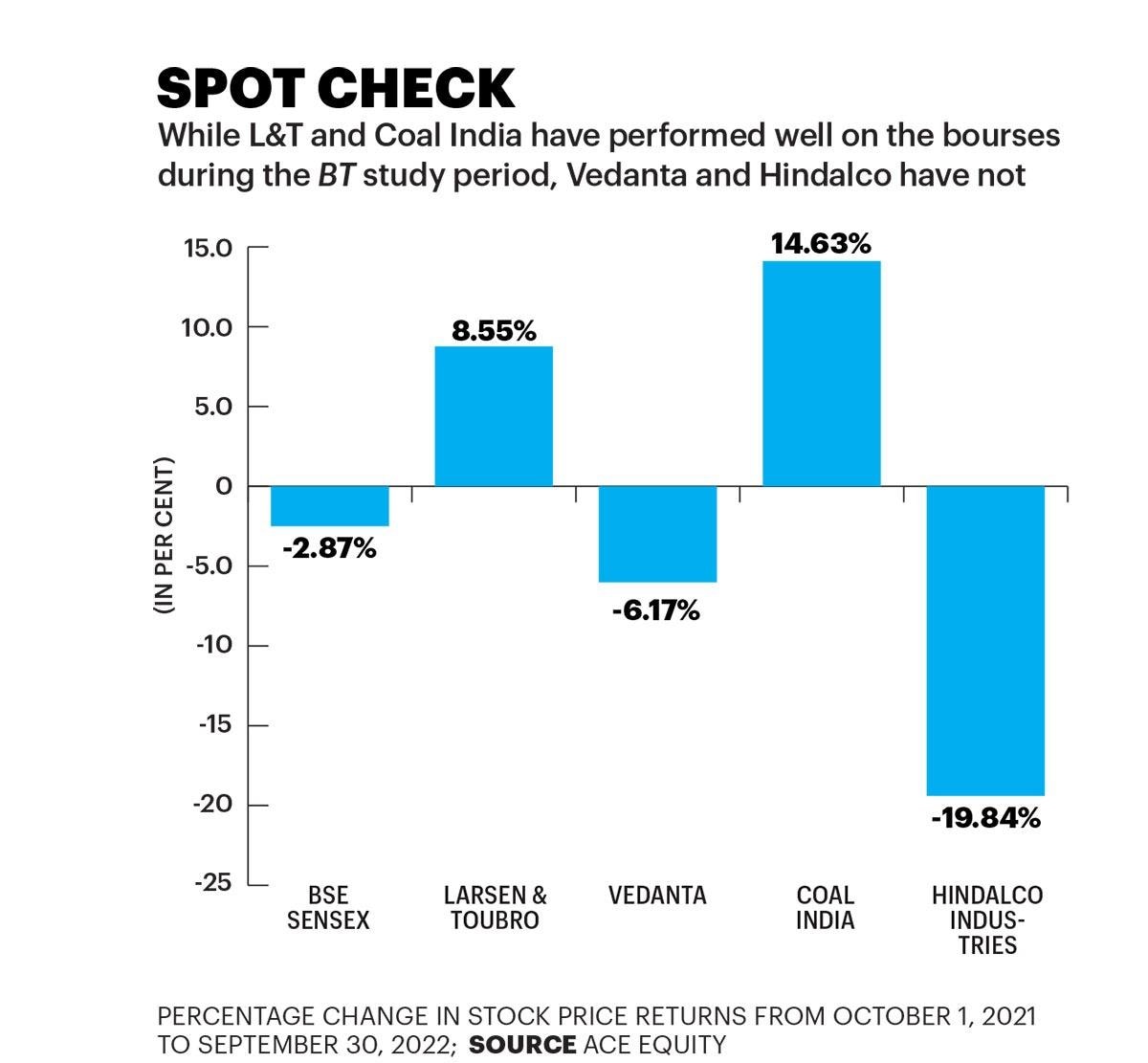 All four companies have spotted opportunities. Vedanta’s Goel says the objective for his company over the next two to three years will be to strengthen its core portfolio apart from integrating the value chain and execute growth projects. While being upbeat about the road ahead operationally and financially, he highlights the advantages Vedanta has, among which are being the world’s largest fully integrated zinc producer and becoming well-placed in areas such as aluminium, and oil and gas. “With our successful acquisition of a nickel and cobalt plant in Goa, Vedanta is the sole producer of nickel in the domestic market. Our underlying strengths and a conducive market scenario places us well to achieve continued growth across our businesses,” he says.

The way forward for Hindalco, points out Pai, is on “organic growth through an expansion of its downstream value-added business, both in Novelis and India”. That is expected to further de-risk the company from the volatility in the space. “In India, we are focussing on high-growth downstream segments—EVs, mobility, packaging, batteries, B&C (building and construction) and consumer durables. Our overseas business—Novelis—will continue to invest in organic opportunities to serve the growing demand for sustainable aluminium solutions.”

While the four companies have impressed investors, the reasons for their good performance are for different reasons. Arora says L&T is “clearly the market favourite given the tailwinds from defence and other manufacturing-related pushes in the domestic market”. In the case of Vedanta, he attributes it to high dividends.

He says that Hindalco is trying to make a recovery as investors get confident that commodities and the US dollar index have hit a bottom. “In the case of Coal India, it is holding on to gains as coal prices remain high and a solution to energy shortages is a while away.”

Whatever be the reasons, these four legacy companies have given investors the much-needed predictability in an uncertain world.