The crackling 500: Here are India's most valuable listed companies

Marked by marquee debutants and top rankers of last year which have only got bigger, the BT500 2022 list is an interesting mix. Here are the finer details of the exhaustive study conducted

Marked by marquee debutants and top rankers of last year which have only got bigger, the BT500 2022 list is an interesting mix. Here are the finer details of the exhaustive study conducted.

“The individual investor should act consistently as an investor and not as a speculator.” American economist Benjamin Graham’s advice seems to encompass all that is currently happening in the Indian stock markets. There is an influx of individual investors, many of whom are looking to make a quick gain. The swift and sudden rally in many stocks is fuelling this behaviour. But that does not mean that the Indian stock market is a speculator’s den. The arena is replete with companies that have emerged as consistent wealth creators. Plus, they also boast impressive growth in terms of profitability.

These performers are what the annual BT500 listing is all about. Started in 1992, the ranking of the biggest 500 companies (by market capitalisation) throws up several interesting insights each year. The ranking is based on the average daily market cap for the 12-month period from October 1, 2021, to September 30, 2022. The cumulative market capitalisation of the BT500 companies this year stands at Rs 251.33 lakh crore, registering a growth of 26 per cent. While that is impressive growth, it is significantly lower than last year’s growth of 43.4 per cent. Interestingly, the surge in valuations this year has happened during a period when the benchmark 30-share S&P BSE Sensex lost 3 per cent of its value.

But first, let’s take a look at the toppers. Private sector major Reliance Industries retains its top slot from 2021 with an average market cap of Rs 17.01 lakh crore, a growth of 20.8 per cent compared to the previous study period. Tata Consultancy Services (TCS) and HDFC Bank retain their No. 2 and No. 3 spots with average market cap of Rs 12.81 lakh crore and Rs 8.11 lakh crore, respectively. Interestingly, while the IT services major saw its valuation jump 10 per cent, the private sector lender registered a growth of a mere 1.2 per cent in its average valuation over the previous study period. To complete the top five, Infosys and Hindustan Unilever (HUL) also retain their respective holds on the No. 4 and No. 5 ranks, despite the FMCG major registering the lowest profit after tax in FY22—Rs 8,887 crore—among the top five occupants of the BT500 study.

Interestingly, the bottom half of the top 10 rankings has a mix of new entrants and changed rankings of earlier occupants. ICICI Bank saw its rank improve from No. 7 to No. 6, while pushing down housing finance major HDFC by one rank to No 7. The market cap of ICICI Bank rose 30.9 per cent while that of HDFC fell by a marginal 0.9 per cent during the study period. The largest government-owned lender, State Bank of India, which was ranked No. 10 in last year’s study, registered a strong 41.2 per cent growth in its average market cap to jump two places and settle at No. 8 this year.

Insurance bellwether Life Insurance Corporation of India (LIC), which made a high-profile entry in the stock market this May but has disappointed in terms of post-listing performance, has made its debut in this year’s listing by taking the No. 9 position, followed by telecom major Bharti Airtel at No. 10 (it was at No. 11 last year). Interestingly, even as the government left no stone unturned to pitch the LIC story to both institutional and retail investors, market participants do not appear very gung-ho on the company. “LIC has brought insurance as a sector in the limelight and could have convinced more players from the private sector to [access] the public markets, but the returns have been disappointing and the street seems to be a bit cautious on the sector,” says Prakarsh Gagdani, CEO of 5Paisa, a discount broking company. The LIC stock touched its all-time high of Rs 920 on the day of its debut on May 17 but is now at around Rs 639 (on November 18).

Meanwhile, Bajaj Finance and Kotak Mahindra Bank have been pushed out of the top 10 ranks this year to No. 11 and No. 12, respectively, despite registering growth in average market cap of 26.8 per cent and 4.1 per cent, respectively, during the study period. 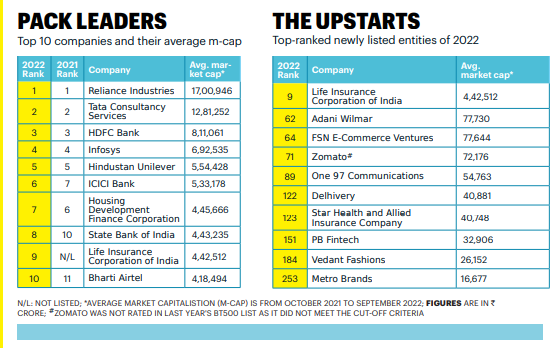 Jimeet Modi, Founder & Group CEO of SAMCO, a group with presence in broking and the mutual fund business, has a strong outlook for the BFSI segment as he believes that the lending industry is poised to grow exponentially on the back of huge demand, especially from retail borrowers. “BFSI as a sector offers great compounding benefits as it has the ability to redeploy capital efficiently and generate returns. India is a great lending story and, hence, BFSI will continue to offer good opportunity, although our preference is towards retail lenders, especially private banks and NBFCs,” he says. Incidentally, India’s only listed stock exchange, the BSE, which is Asia’s oldest bourse, saw its rank jump from No. 497 to No. 351 as its valuation more than doubled to Rs 9,138 crore from the earlier Rs 3,460 crore.

Moving away from sectors on to conglomerates, the Gautam Adani-led Adani Group has been in the limelight this year as the stock prices of most of its listed entities have registered strong growth. Barring Adani Ports and Special Economic Zone, which saw its rank drop slightly from 29 to 31, all the other Adani entities have seen their ranks improve, with Adani Power registering the biggest jump from 136 to 58. Adani Green Energy (15), Adani Transmission (19), Adani Total Gas (22) and Adani Enterprises (24) all improved their ranks as the average market cap of most of the group’s entities more than doubled when compared to the previous study. Newly-listed Adani Wilmar, India’s biggest FMCG company, made its debut on the bourses in February this year, and made its entry in the BT500 rankings at No. 62.

Starting up in the Rankings

Interestingly, some of these firms also feature in the list of the top 10 loss-making companies in the BT500. Paytm reported a net loss of Rs 2,350.5 crore in FY22 while Delhivery and Zomato also registered net losses in FY22 of Rs 1,011 crore and Rs 1,222.8 crore, respectively. “The biggest signal that one got after some of the big guns of the start-up segment listed on the bourses was that you have to value capital since it is limited in nature. You cannot splurge it in the interest of growth,” says Gagdani. “There is always merit in having a start-up with a concept that disrupts an industry, but then at what cost? At some point, there has to be some profitable growth in sight.”

It would, however, be unfair to state that the list of new entrants—and also that of loss-making companies—is replete with only start-ups as many old-economy firms have also made it to both the lists. Apart from LIC and Adani Wilmar, old-economy entities like Star Health and Allied Insurance Company (No. 123), Vedant Fashions (184), Motherson Sumi Wiring India (204), Metro Brands (253) and Aditya Birla Sun Life AMC (269) entered the BT500 rankings this year. Further, the top loss-making company in the list is embattled telecom giant Vodafone Idea with a net loss of Rs 28,246.6 crore in FY22, followed by Tata Motors and InterGlobe Aviation with net losses of Rs 11,234.7 crore and Rs 6,161.8 crore, respectively. All loss values are from their consolidated financial statements.

Even as the year saw the markets being gripped by various concerns including inflation, oscillating crude prices, rate hikes and an overall slowdown in the global economy, most companies in the BT500 rankings registered healthy growth in their profit. Nearly 390 companies saw their bottom line improve in FY22 when compared to the previous fiscal, with all the top 10 companies being part of the bandwagon. The biggest jump in the bottom line among the toppers was recorded by SBI, which saw its FY22 profit after tax surge nearly 50 per cent to Rs 36,356.2 crore, compared to Rs 24,279.7 crore in FY21.

Interestingly, as many as 77 companies saw their net profit more than double in FY22 when compared to FY21, including companies like Godrej Industries, Info Edge (India), Tata Steel, Nazara Technologies, Adani Power, SAIL, Hindalco Industries, JSW Steel, and ONGC. “Companies that are focussed on improving their profitability have performed much better than those that are in losses and, more importantly, the losses are increasing,” says Gagdani.

Meanwhile, companies that saw their losses more than double between FY22 and FY21 included names like Policybazaar, Ashok Leyland, Dhani Services, Delhivery and Swan Energy. Market participants, meanwhile, believe that investors need to be cautious even as valuations and bottom lines of most companies are on the rise and the benchmarks are also within kissing distance of their all-time highs. On November 18, the benchmark Sensex closed at 61,663.48, less than 600 points away from the record high of 62,245.43 it touched on October 19, 2021.

“The worry among market participants is that Indian markets are rallying at a time when most other economies are decelerating, the US Fed is hiking rates and there are concerns related to recession as well. It is a unique situation that has not been seen in the past many years. That is leading to a lot of scepticism and there are questions raised over the sustainability of the rally,” says Modi of SAMCO.

In a similar context, Gagdani says that the current rally is not backed by fundamental factors and seems to be driven by liquidity. “We are still battling inflation with interest rates rising, leading to higher EMIs. The festive season has not been great for many sectors. So, there is a big question mark around what is fuelling the current rally. It is more about liquidity. While FPIs (foreign portfolio investors) have been sellers in most of the recent months, the selling has been absorbed by domestic money. I am not sure if we will touch new highs,” he says.

While one will have to wait and watch how the Indian stock market plays out in the coming months, one thing is certain: investors need to be cautious and look at investing in strong and large companies rather than speculate for a quick buck.

And to know more about the largest listed companies of India, one can always refer to the BT500 rankings.