A birthday party for children can be a dull affair for adults, but one such party in Mumbai brought together Tushar Amin and Apoorv Gupta, who observed the short attention span that children had with some toys. "Kids would open something, figure out how it works and then lose interest. There was no constructive engagement," recounts Amin.

This observation led Amin, who was then working with kids' social network Worldoo, to research more about toys available and he realised that not much innovation had taken place in the segment and children were increasingly preferring the digital medium, which was a cause of concern for parents. Amin and Gupta bounced around ideas for a while and were soon joined by Gupta's flatmates Ashwini Kumar and Rajat Jain, all three from IIT Delhi.

The team spent around a year researching the idea. They made some products and sold them at birthday parties and shops to get feedback from parents and shop-owners. In 2015, they launched their first range of products. The range, which is based on basic principles of science, technology, engineering and mathematics (STEM), saw a positive response. The products are mostly building activities and need engagement, concentration and skill, and hence require parental guidance. 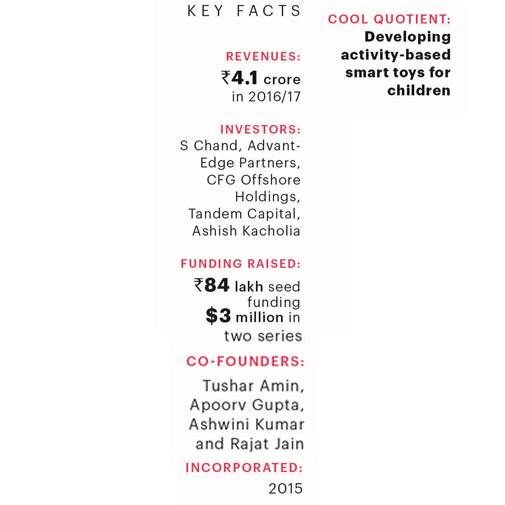 Being a mix of physical and digital, and not solely digital, the company had trouble finding an investor initially. "We heard a lot of 'bring me an app and downloadable sheets and I will give you money'," says Amin. But once the founders identified the right people, the nature of the meetings changed. These investors, many of whom were parents themselves, showed keen interest in the products. "The first half an hour was usually spent playing with the products. The Excel sheet was brought up later," says Amin.

Among Smartivity's first backers was publishing house S Chand, which got them seed funding of Rs 84 lakh in 2015. Then it raised $1 million in Pre-Series A round funding led by S Chand Group and early-stage investment firm AdvantEdge Partners, along with Singapore-based fund CFG Offshore Holdings, Silicon Valley-based fund Tandem Capital, and some angel investors. Earlier this year, Smartivity received $2 million from investor Ashish Kacholia.

Choosing between online and offline channels to sell their products was another challenge for the company. They started out with the traditional retail route as it would mean spending less on digital marketing and they could focus on design. Initially, they witnessed resistance from distributors, who wanted higher if not the same margins as from branded products. "When we started approaching distributors, they asked us for 70-80 per cent margins since we were a new brand and didn't run TV campaigns," says Gupta. Smartivity's products are now sold in more than 60 cities in India, and on online channels such as Flipkart and Amazon. They have also introduced more ranges - 3D colouring products for kids aged 2-6, augmented reality-based puzzles, robotics based coding games, and virtual reality-enabled lenses. The company also has an app now.

Smartivity Labs is tapping multiple channels to generate revenue. Besides retail, it has partnered with schools and Kidzee centres, and claims to supply 150,000-300,000 units to them yearly. According to the company, retail and schools contribute equally to its revenues. The startup reported revenues of over Rs 4.1 crore and a loss of over Rs 1.1 crore in FY17, according to a filing with the Ministry of Corporate Affairs. In FY16, it had reported earnings of over Rs 1.1 crore.

Smartivity's founders, who consider only LEGO as their competitor, say their affordale pricing - Rs 299-1,999 - gives them an edge.