Sell in May...Does it Work in India?

The theory has had limited success in India, but experts say it might work if the elections bring in a stable government.
Tanvi Varma/Money Today | Print Edition: May 2014 "Sell in May and go away, come back on St Leger's Day", is an old stock market adage. The idea was to sell all your stock holdings in May and re-buy them in October. The proverb can be traced to a more leisurely era in Great Britain, when traders closed their positions to enjoy the summer season and returned only after the St Leger's, the last race of the season, held in September. Many market participants believe that May to October is a bad period for the stock market compared to November to April. This is based on the historical monthly performances for equities during the June, July and August period.

Whether this adage holds true for the Indian markets is yet to be seen. The average return of the broader market - the BSE Sensex - between May and October since 1994 has been 5% compared to 9% delivered between November and April during the same period. The November-April period has also seen higher number of instances of returns greater than 7% (the average risk-free rate of return) compared to the May-October period. The negative returns have been similar during both the periods, but the fall has been greater during the May-October period. Of the eight instances of negative returns of more than 10% since 1994, six were witnessed during the May-October period.

While there is some data to support this theory, there is no conclusive evidence that it holds true all the time. "We can cite lower trading volumes due to the summer vacation and increased investment flows during the winters as contributory reasons for the discrepancy in performance during the May-October and November-April periods", says Devang Mehta, senior vice president and head, equity advisory and sales (retail), Anand Rathi Financial Services.

Shrikant Chouhan, head, technical research, Kotak Securities, believes that it is also based on the correlation theory and it works well for the stock market because most of the stock market activities are schedule-based. India, for instance, conducts Lok Sabha elections mostly during May and that's the reason why every five years we come across a greater volatility in May. "In the current month also we expect volatility of 10% on either side", he adds.

Dhananjay Sinha, head, institutional research, Emkay Global believes that this theory may be applicable this time around. He adds that if media surveys are to be considered, the election results will be in favour of BJP-led alliance. A report by Nomura Securities concurs and believes that such an outcome will act as a medium-term positive for the economy by accelerating economic reforms, coupled with continued prudent monetary policy. 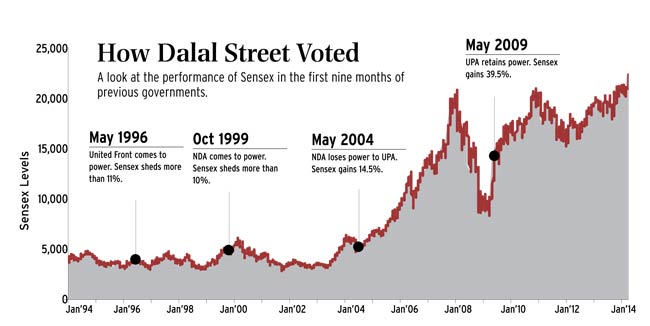 The theory that markets react well to a stable government, is validated by the fact that during the general election of 2009, when UPA won for the second time, the markets rose 27% within a month and a total of 40% nine months later (See: How Dalal Street Voted). "To cash on this run, market has been placing cyclical bets in construction, real estate, capital goods and banking," says Sinha. This can be seen in the performance of select sectoral indices like Realty and Capital Goods Index, which have given superior returns in the last two months, in a pre-election mood.

The markets may be entering a cyclical bull run if the election outcome is as desired and the investment and capex cycle recovers. "Markets may rally about 10% in which case sectors like capital goods, infrastructure and rate-sensitive (banks, autos) stocks will outperform," says Nitin Jain, CEO, Edelweiss Broking. On the other hand, private banks are a good hedge in case of a poor election outcome which could be negative for policy environment and asset quality. Another report by Nomura points out that the oil and gas sector is a positive play given fiscal constraints and even a weak government will likely continue with oil reforms. Chouhan of Kotak adds that technology stocks will remain under pressure as the rupee remains strong due to increased inflows. Here, we look at some of the top picks according to various brokerage houses.

ICICI Bank: (Recommended by Motilal Oswal, Anand Rathi & Kotak Securities) The stock is not expensive yet compared to its historical average, trading at a price to book value of 2.1. The company's loan growth is expected to remain healthy at 17% year-on-year , while margins too are expected to remain stable in the near future.

IOC: (Motilal Oswal) IOC trades attractively at 8.8 times its 2015-16 estimated earnings. We expect marginal sharing of 2% of the subsidy by oil marketing companies for 2014-15 and 2015-16, with the rest being shared by upstream and the government.

L&T: (Anand Rathi & Kotak Securities) It has the best diversified play on infrastructure revival and hence, remains poised to gain from traction in infra spending. The company has been the most consistent performer in the pre-poll period, yielding average returns of 23% in the three months prior to each of the last five elections and outperforming the market by about 11%.

Infosys: (Emkay & Motilal Oswal) The software major beat the Street by reporting fourth quarter profit at Rs 2,992 crore, up 4% on a sequential basis while net profit grew 25% on a y-o-y basis. Despite the high-level exits at the company, 'the success with the sales effectiveness initiative will help rebuild and restore confidence on the Infosys recovery story.

Zee Entertainment: (Edelweiss, & Emkay) Structural change in the sector through digitisation, rising ARPU (average revenue per user), increase in the market share in advertisement, sticky subscription revenue and strong returns ratios are the essential positives. Consolidated revenue is expected to grow at 14% between 2013-14 and 2015-16, while profit after tax is expected to grow at a rate of 19% during the same period.

Motherson Sumi: (Edelweiss & Emkay) The company is an efficient auto ancillary player with global presence, competent management and strong execution. EBITDA margins stand at 10.1% and is expected to rise in to mid-teen levels.

Sun Pharma: (Anand Rathi & Motilal Oswal) The acquisition of Ranbaxy makes it the biggest in the domestic market with a 9% market share and revenues of about $1 billion. Given Sun's track record in turning around distressed assets like Taro and DUSA, high-quality management and consistently good results, the odds are in favour of Sun turning around Ranbaxy's operations too.

It's right time to invest in 'high beta stocks'