Maruti Suzuki e-Survivor features electric four-wheel drive - inbuilt electric motors in each wheel control them independently. This allows the car to be manoeuvred easily depending on the terrain.

The e-Survivor electric concept sports utility vehicle reappeared before the public after four months at the Auto Expo 2018 today. Expected to be one of the talking points at the Maruti Suzuki stall this year, the e-Survivor is what the company is calling a tribute to its four wheel drive heritage.

The e-Survivor concept SUV was first seen at the Tokyo motor show in October last year, where it turned heads with its futuristic looks. The lightweight body of the SUV has been combined with a ladder frame and high ground clearance, for durability and ease of drive on rough terrains. Maruti Suzuki e-Survivor features electric four-wheel drive - inbuilt electric motors in each wheel control them independently. This allows the car to be manoeuvred easily depending on the terrain. Suzuki has even equipped the e-Survivor with autonomous driving abilities, which can easily be switched to manual.

The two-seater cabin of e-Survivor concept SUV is flanked by transparent doors. The entire dashboard is a touch screen, which can be used for navigation, to display images from vehicle's camera, or connect to devices for displaying information like terrain, weather, and more. The steering has a spherical display which shows the vehicle's condition and road conditions. The central console seems to house a holographic setup. 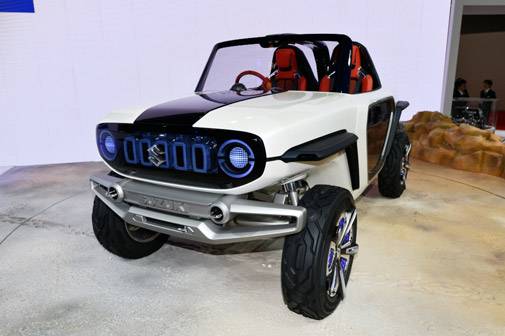 As of now, the only definite information on e-Survivor is about the dimensions of the vehicle (3,460mm long, 1,645mm wide and 1,655mm high). Considering the futuristic tech that the car promises, it will be some time before we see it, or something similar, go into production.