Suzuki Intrduer 150 may be launched in India soon; price likely to be less than Suzuki Gixxer

The low-capacity cruiser segment in India is presently dominated by Bajaj Avenger which has no opposition to challenge it. It will be against this market favourite that the Intruder 150 will be pitted against.

Suzuki Motorcycles might launch a small-capacity cruiser in India on November 7, reports suggest. This new offering could be named Intruder 150, after the company's existing line of cruisers. In addition to this, images of the rumoured cruiser have emerged, strengthening speculations. As the Japanese auto company remains tight-lipped on its new motorcycle, no details could be ascertained about its engine or other specifications.

The low-capacity cruiser segment in India is presently dominated by Bajaj Avenger which has no opposition to challenge it. It will be against this market favourite that the Intruder 150 will be pitted against.

Going by the images available on BikeAdvice.in, the supposed Intruder 150 would share the design language seen on the likes of Intruder M1800R. The round headlamp with angled visor, wide fuel tank, twin exhaust pipes, will be some of the cosmetic features that might show up on the smaller Intruder. The images show additional fairing along the fuel tank which makes the body lines seen on Intruder family of cruisers.

The images also show projector LED headlamps, aerodynamic tank, ABS, but reveal nothing about the motor that will drive the Intruder 150. Rumours indicate that it will borrow the 154.9 cc engine from Suzuki Gixxer, the most-popular motorcycle from Suzuki stables in India right now. The single cylinder engine is capable of producing 14.6hp of power at 8000rpm and 14Nm torque at 6000rpm. It comes paired with a 5-speed transmission. 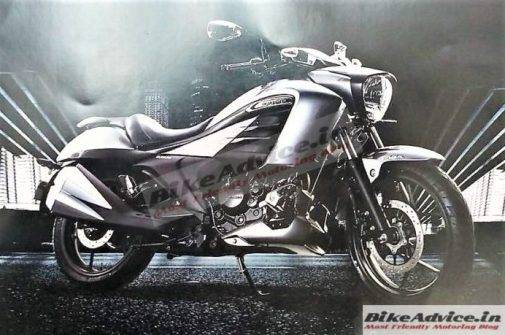 The spy images of Suzuki Intruder 150 as seen on BikeAdvice,in
Click here to Enlarge

Reports also suggest that Suzuki is likely to keep the price on the rumoured Intruder 150 below that of Suzuki Gixxer. In India, various variants of Gixxer are retailing within the range of Rs 77,000 and Rs 98,928 (ex-showroom Delhi).