In the next five years, the Indian banking system will probably have fewer public sector banks (PSBs) from the current two dozen as the consolidation drive accelerates to create a few large banks. There would also be some serious effort to delink the government, or most specifically the finance ministry, from PSBs by making the existing Bank Board Bureau (BBB) more autonomous, and also to push for Bank Investment Company (BIC) to house government stake in PSBs. There would also be less burden of recapitalisation on the government exchequer as the surplus capital of the Reserve Bank of India (RBI), estimated to be in the region of Rs 1-3 lakh crore, is deployed.

Last but not the least, the fine tuning of the Insolvency and Bankruptcy Code (IBC) with additional infrastructure, especially in National Company Law Tribunal (NCLT) benches, would result in faster resolution of lakhs of crores stuck in stressed assets.

But there is a big 'if' before the script can play out in the fashion we have described, and that is the new government's seriousness to first admit that there is indeed a problem.

While no bank has failed, the situation is alarming. Recently, the CEOs of three large private banks were shunted out on performance, governance and compliance issues. A mid-sized private bank is saddled with large loans given to troubled IL&FS, Jet Airways, Dewan Housing and a few other companies. Banking as a whole is running on single-digit credit growth, profitability is declining while bad loans are increasing (they increased by 30 per cent-plus in 2017/18).

The reality is that India's banking system is clogged. Banks' capital is locked in over Rs 14 lakh crore of stressed assets where the resolution mechanism is still slow. There are capital shortages, especially in PSBs, which control two-thirds of the banking sector. Close to a dozen banks are classified as potentially weak, though some are being pushed ahead with the blessings of the regulator in order to support economic growth. There is also complete risk aversion among bankers who are moving away from long-term project financing.

In fact, there are also new pockets of risk building up in areas like unsecured loans (personal loans and credit card), MSMEs, MUDRA loans and the agricultural sector. Given the overall economic slowdown and the decline in high frequency indicators like Index of Industrial Production (IIP), exports, auto sales and credit growth, the problems for banks are only going to compound if the regulator and the government don't fix the banking system.

In its previous term, the current BJP-led NDA government pursued an agenda of creating a few large banks from among the PSB pack. The largest, the State Bank of India (SBI), merged five of its associates with itself. A three-way merger of Bank of Baroda, Vijaya Bank and Dena Bank was also announced. IDBI Bank was handed over to LIC as promoter. Clearly, the government plans to take forward the model of merging three PSBs with at least one lead bank with a size like Punjab National Bank or Canara Bank. The idea is to merge mid-sized or weak banks so that they have better management bandwidth, a bigger platform to exploit business opportunities and also use capital efficiently. But many experts suggest that the issues with PSBs are more fundamental. 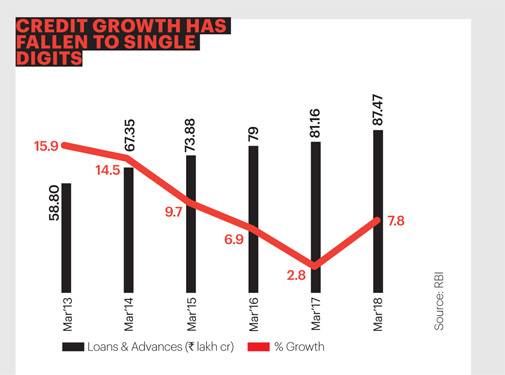 PSBs currently mirror each other in terms of portfolio mix with large exposure to corporate banking, a high-cost structure, look and feel of branches, work culture and also lack of digitisation, risk management practices and performance management. "The merger will create more of the same," says Ranu Vohra, MD and CEO at Avendus Capital. Size is important but so is profitability and efficiency, says Shyam Srinivasan, MD and CEO of Federal Bank. Create more small banks, says Hitesh Asrani, Director at CRP Risk Management. "The control will be far higher in smaller entities. Today, it is very difficult for the senior management to have an oversight of a large bank," says Asrani.

What is missing in the government's current merger strategy is the right fit in terms of product, geography, management, etc. While the merger exercise and integration would take two to three years, the government has to think of how to better govern PSBs since a merged entity will carry a much higher systemic risk. "Any failure of a large bank could bring down the entire system," says an official with a public sector bank.

In its previous term, the government came out with the path breaking BBB for selecting the right candidates to head PSBs. It, however, remained an advisory body for appointments with no other role. "BBB can play a role in risk management, human resource and asset resolution," says a former member of BBB. Similarly, the next logical step after BBB, as recommended by the P.J. Nayak Committee on Governance, was to set up a Bank Investment Company (BIC) to hold the government's stake in PSBs.

BIC was modelled as a sovereign wealth fund for PSBs to raise funds from the market. Even as the government pursues its agenda of merger, reforming BBB and setting up BIC, the immediate priority is to recapitalise banks. Many suggest the RBI's surplus capital, if any, should be specifically utilised to make PSBs stronger in terms of capital.

A merger of PSBs is likely to lead to creation of a few large PSBs, or too-big-to-fail institutions, which are more vulnerable to failure because of legacy issues and the fundamental nature of their business mix. SBI, with a balance sheet size of Rs 37 lakh crore post-merger, controls a quarter of the deposits and advances in the banking system. Bank of Baroda's merger will create a large entity with over Rs 11 lakh crore balance sheet size, close to the second largest bank, HDFC Bank.

Similarly, other PSB mergers will create a few large entities of Rs 10 lakh-plus asset size. The banking regulator will have to closely monitor their functioning, otherwise an IL&FS kind of an incident could create more trouble for the banking industry. Currently, half a dozen potentially weak PSBs are out of the prompt corrective action (PCA) zone, thanks to the government and the RBI, and have resumed normal lending. These weak banks pose a risk to the system.

Take for example, Corporation Bank, which has recently come out of PCA. It has seen a 120 per cent-plus jump in exposure to NBFCs when other banks have turned cautious after IL&FS and Dewan Housing defaults. Similarly, another PCA-released bank, Allahabad Bank, has seen its corporate exposure growing, especially in the infrastructure sector (roads and ports, cement, gems and jewellery). Delhi-based Oriental Bank of Commerce has seen robust growth in its retail book, but a close examination shows rise in unsecured loans, especially personal loans.

Experts question the entire PCA mechanism. "It hasn't been constructive," says the head of a rating agency. There has been no deep introspection on the reasons for the weakness. "The focus of the regulator should be on drastic changes in the business model, building in more checks and balances, better credit evaluation and risk management framework," adds the rating agency head. Asrani of CRP Risk Management, who deals with PSBs in the area of risk, suggests creating a new layer of risk management for PSBs for validating and using surrogates to verify information provided by loan seekers.

Between 2000 and 2010, risk was building up in corporate loans as banks blindly funded expansion and diversification plans of India Inc. The economic slowdown and policy paralysis in India and China downslide also put companies and banks in a fix. The result was excess capacity, over-leveraged companies and defaults in bank loans. Many experts suggest that risk is again building up in the system, especially in retail banking due to unsecured loans like personal loans and credit cards, the MSME and business banking segment (loans against property), and in government directed MUDRA and agricultural loans. 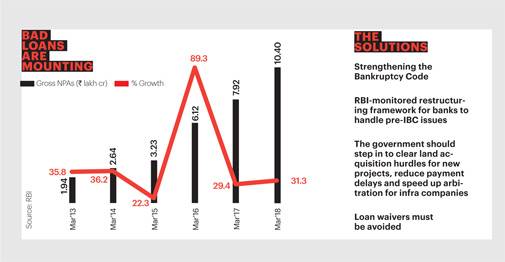 "MSME loans have got an RBI breather by way of restructuring so the real picture of NPAs (non-performing assets) will emerge only after the scheme ends," says a private banker. Similarly, banks are going after retail banking, where there is a tough competition. Margins and yields are low in mortgages, so banks are chasing unsecured loans, where margins are high. "For how long can this lone engine support growth?" says a consultant.

A bigger concern is risk aversion among bankers which is taking them away from project loans. "The days of taking aggressive calls on project loans and infra financing are gone. The banks have realised that their ALM (asset liability management) is not suited for long gestation loans," says a credit rating official. Even in the past, the majority of banks would not evaluate a large project loan on a standalone basis. Instead they went by the judgement of lead banks like SBI, ICICI Bank or PNB. Today, the government has big plans for infrastructure investment while the framework of development financial institutions (DFI) is missing. ICICI, IDBI and IDFC have all converted into retail banks. Federal Bank's Srinivasan suggests creating new instruments to fund infra needs. "Globally, banks get in when the project is either completed or nearing completion," he says.

There are already plans to create new entities or funds to pool in resources from pension funds, insurance companies and other long-term investors. But that's easier said than done as the requirement of funds is more immediate. Therefore, the burden of supporting project financing and the infrastructure sector is likely to fall on PSBs. All the more reason for the government and the RBI to tread cautiously to not only fix the banking system, but also protect it from threats.